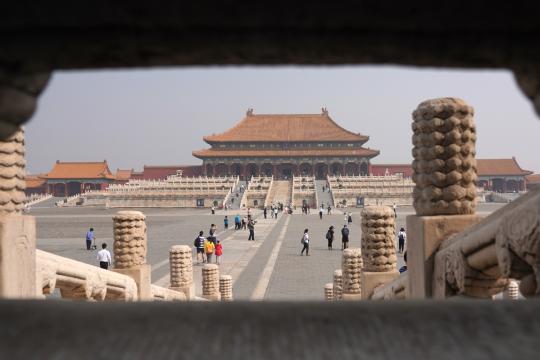 Hong Kong leaders and Beijing municipal officials set their sights on Thursday on high-end service and the innovation and technology industry for closer cooperation between the two cities to enhance their competitiveness on the world stage.

They shared the aspiration at the opening ceremony of the 23rd Session of the Beijing-Hong Kong Economic Cooperation Symposium held online this year because of the pandemic.

The event has been held annually since 1997 to promote investment between the nation's capital and the special administrative region but was suspended in 2019 due to Hong Kong's social unrest.

The officials envisioned that as cooperation between the two places deepens, Beijing will become more open and Hong Kong will find new engines of economic growth. Moreover, through a strong alliance, the two cities will play a leading role in the construction of the Belt and Road.

Beijing Mayor Chen Jining said at the ceremony that Beijing is working on building a national-level services industry opening-up demonstration zone and free trade zone, which will make the city an important platform for China's opening-up and provide opportunities for deepening cooperation between Beijing and Hong Kong.

Wang Wenjie, a deputy secretary-general at the Beijing municipal government, said that Beijing will learn from the experience of Hong Kong, ranked by the Fraser Institute as the world's freest and one of the most competitive economies, to reform in areas including building permits, cross-border trade and taxation. Through these improvements, Beijing aims to create a stable, fair and transparent world-class business environment and develop an open economy at a higher level, Wang said.

Lam also said that, through closer academic and research exchanges, Hong Kong will avail itself of Beijing's science and innovation advantages and make more breakthroughs in this area itself, as it is also high on her administration's agenda.

Wang said the universities, research centers and enterprises in the two places can work together to establish close cooperation with nations involved in the Belt and Road in science and technology. These institutions can jointly promote the application of Chinese innovation in domestic and international markets.

Lam said that companies from the two places will strengthen cooperation in other areas such as finance, legal services, accounting and risk management to explore the global market.

Hong Kong has long enjoyed close trading ties with Beijing. The State Council said in November that as Beijing's largest source of investment outside of the Chinese mainland, Hong Kong investors have established 17,000 enterprises in Beijing and accumulating a total investment of over $102 billion, or 52 percent of all capital investment in Beijing from outside the mainland.

Hong Kong is also Beijing companies' primary choice for entering a market beyond the mainland. As of September, Beijing has invested accumulatively more than $36 billion in Hong Kong, accounting for 47 percent of Beijing's outbound investment outside the Chinese mainland.

Du Juancontributed to this story.