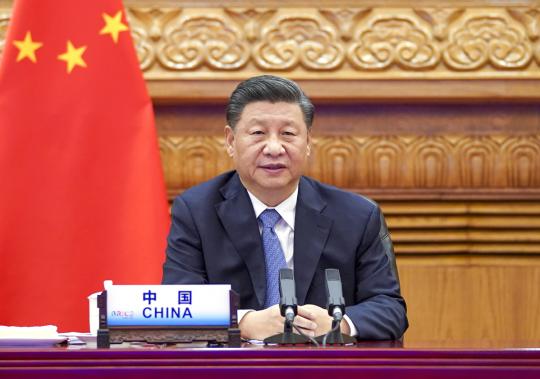 President Xi Jinping addresses the virtual 12th BRICS Summit via video link in Beijing on Tuesday. Chinese officials participated in the meeting at the Great Hall of the People in Beijing. (Photo by Li Xueren and Ding Lin/Xinhua)

President Xi Jinping called on Tuesday for wiping out the "political virus" in the world's fight against the COVID-19 pandemic and promoting global economic recovery by upholding openness and innovation.

Xi made the remarks in Beijing when addressing the 12th BRICS Summit via video link. BRICS groups the emerging markets of Brazil, Russia, India, China and South Africa.

"What has happened shows that acts of politicization, stigmatization, blame-shifting and scapegoating only serve to disrupt overall global cooperation against the virus," Xi said. "We need to overcome division with unity, replace bias with reason and stamp out the 'political virus'. In this way, we will pool the maximum global synergy to beat the virus."

He called on the BRICS countries to uphold multilateralism to safeguard world peace and stability.

It is against the universal aspiration of people around the world to ignore rules and the rule of law, engage in unilateralism and bullying, and keep withdrawing from multilateral groups and reneging on agreements, Xi said, adding that such acts trample on the legitimate rights and dignity of all countries.

He expressed opposition to interference in the internal affairs of other countries, as well as unilateral sanctions and "long-arm jurisdiction".

Xi underlined the need to support the World Health Organization in playing a leading role in the fight against the pandemic, and called on the BRICS countries to strengthen cooperation in vaccine research and development.

Noting that Chinese companies are carrying out Phase III clinical trials of COVID-19 vaccines with Russian and Brazilian partners, Xi said China is also willing to cooperate with South Africa and India in this regard.

He proposed that the five BRICS countries hold a symposium on traditional medicines to explore their role in preventing and treating COVID-19.

"China has joined the COVAX facility, a platform on which we will share vaccines with other countries, developing countries in particular. We will actively consider providing vaccines to BRICS countries where there is a need," Xi said. 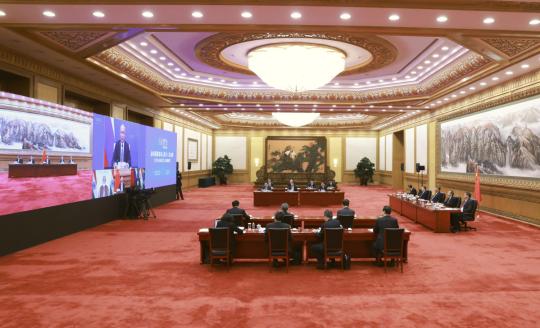 President Xi Jinping addresses the virtual 12th BRICS Summit via video link in Beijing on Tuesday. Chinese officials participated in the meeting at the Great Hall of the People in Beijing. (Photo by Li Xueren and Ding Lin/Xinhua)

Noting that stabilizing the economy while controlling the pandemic is the pressing task facing all countries, Xi underlined the need to pursue openness and innovation and promote global economic recovery. "Under the current situation, we need to stand firm for building an open world economy."

The practice of using the pandemic to pursue "de-globalization "or to clamor for "economic decoupling" and "parallel systems" will end up hurting one's own interests and the common interests of all, he said. "We need to uphold the multilateral trading system with the World Trade Organization at its core and reject abuse of the 'national security' concept for protectionist purposes," he added.

Saying that the global economy is experiencing the worst recession since the Great Depression in the 1930s, Xi put forward proposals for BRICS cooperation to overcome global challenges.

"We need to leverage the new business forms and models triggered by the pandemic, strengthen cooperation on scientific and technological innovation, and nurture an open, fair, equitable and nondiscriminatory business environment to bring about common development of higher quality and stronger resilience," he said.

China is willing to work with other BRICS countries to accelerate building a BRICS partnership on the new industrial revolution, Xi said, adding that China will set up an innovation center for such a partnership in Xiamen, Fujian province.

Xi called for prioritizing people's livelihoods to promote sustainable development across the world, saying that development holds the key to solving all problems.

In his speech, Xi also stressed the need to pursue green and low-carbon development, and strive for harmony between man and nature. "We need to implement the Paris Agreement in good faith, stick to the principle of common but differentiated responsibilities, and provide more help to developing countries, particularly the small island developing states," he said.