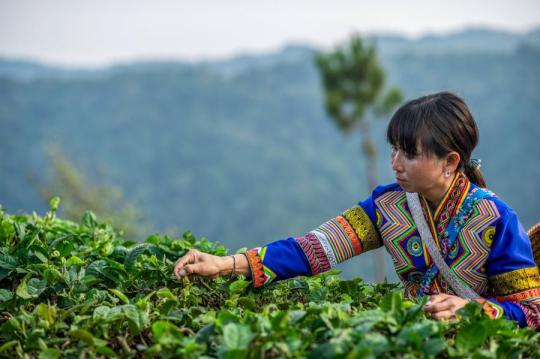 Counties in province and autonomous region no longer rated impoverished

As China gets closer to ending absolute poverty by the end of this year, Yunnan province and the Xinjiang Uygur autonomous region, two border areas that are home to many ethnic groups, announced Saturday that they no longer have any "impoverished counties".

Nine counties in Yunnan and 10 in Xinjiang shook off their poverty labels recently, according to statements by the provincial and regional governments. The announcements were based on evaluations by local governments and independent assessors.

Six years ago, the central authorities released a list of 832 impoverished county-level regions. The counties on the list in less affluent western regions had poverty rates above 3 percent, while those in wealthier coastal provinces had rates above 2 percent.

Yunnan had 88 such counties when the list was released, more than any other provincial-level region. Some of the most entrenched poverty in the province was found in counties inhabited by 11 smaller ethnic groups who until recently practiced relatively primitive ways of life.

The provincial government said the assistance programs that have helped such regions escape poverty will remain in place, and more efforts will be made to create jobs for farmers and help relocated people settle into new homes.

Xinjiang, formerly home to more than 3 million impoverished people and thousands of poverty-stricken villages, has long been one of the major focuses of China's sweeping anti-poverty efforts. It had 32 impoverished counties in 2014, a number that began to decline two years later.

Programs to promote employment and the greening of deserts in the region have bolstered rural incomes. Official figures show Xinjiang's per capita disposable income grew by an average of 9.1 percent a year from 2014 to 2019.

Most of the poverty-stricken villages were in the region's ecologically-fragile south, home to the Taklimakan, China's largest desert. In Hotan prefecture, oasis areas suitable for human survival occupy less than 4 percent of the land. Half the counties declared out of poverty on Saturday are in the prefecture-Moyu, Pishan, Yutian, Qira and Lop counties.

Yang Hua, Party secretary of Hotan's poverty-alleviation office, said the counties' removal from the list means 228 poverty-stricken villages and 76,900 people under her jurisdiction are no longer impoverished according to official standards, which include a per capita income of at least 4,000 yuan ($605) this year.

"Hotan will keep developing characteristic and advantageous industries to ensure that people can have a sustained and stable source of income," Yang told Xinhua News Agency.

The establishment of livestock-breeding cooperatives and labor-intensive workshops has been a key part of those efforts, along with irrigation and transportation infrastructure projects.

Since the latest poverty alleviation drive was launched eight years ago, China has implemented targeted poverty relief campaigns in far-flung rural areas that have renovated dilapidated homes, subsidized schooling, reimbursed medical bills and bolstered access to clean water. Programs have also been rolled out to open job-creating factories and move farmers out of their isolated, sparsely-populated ancestral homes, where the mass provision of basic public services is not cost effective.

Over the past five years, Yunnan has relocated about 1.5 million people from inhospitable areas to safe and stable homes, the government said.

The central authorities have stressed repeatedly that not a single ethnic group shall be left behind in the poverty eradication campaign, despite the economic damage caused by the COVID-19 pandemic and destructive summer floods.

Wang Shizhong, a researcher at South Central University for Nationalities in Wuhan, Hubei province, who studies poverty issues among ethnic communities, said many of China's poorer regions have been places inhabited by smaller ethnic groups.

He said development programs in such regions not only bolster locals' economic standing, but also strengthen ethnic unity and, in many cases, national defense.

Counties yet to be removed from the "impoverished counties" list are in the provinces of Sichuan, Guizhou and Gansu, and the Guangxi Zhuang autonomous region.