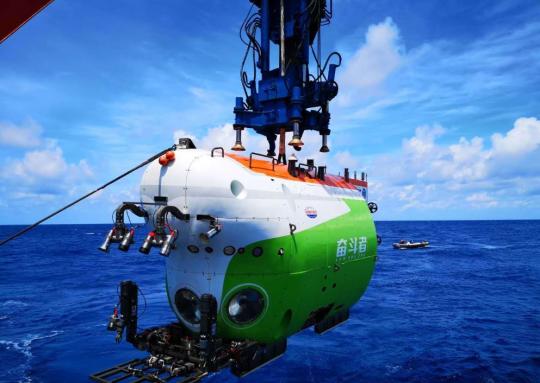 China's new deep-sea manned submersibleFendouzhe, or Striver, set a national diving record of 10,909 meters on Tuesday in the Challenger Deep, a 11,000-meter chasm located at the bottom of the Mariana Trench in the western Pacific Ocean, according to China Central Television.

Experts said these deep-sea vehicles could help collect samples and data from the deepest part of the ocean for hydrothermal, geological and marine biological research, as well as study the human impact on the area.

The ocean, especially the deep sea, is widely regarded as Earth's final frontier. Deep down in the ocean are exotic creatures, strange environments and awe-inspiring geological wonders grander than anything on land, yet humanity knows less about the ocean floor than about the far side of the moon, according to the Chinese Academy of Sciences.

In 2016, scientists and engineers from the teams behind China'sJiaolongand Shenhai Yongshi(Deep-Sea Warrior) submersibles launched a project to create a manned underwater vehicle capable of surveying the entire ocean. The vehicle was later named Fendouzhe.

Yang Bo, a researcher at the Institute of Acoustics of the Chinese Academy of Sciences, told CCTV that breaking any submersible diving record is no easy task, but it is something that must be done for scientific research and the nation's development as a maritime power.

"We are entering unknown territory in the 9,000 to 11,000 meter depth range," he said. "There are a series of uncertainties, but we can solve them with ample preparation."

Fendouzhe, one of the world's deepest-diving manned submersibles, is capable of carrying up to three passengers to conduct scientific research in the deep sea. It is electrically powered and can operate for around 10 hours underwater.

Almost all of the vehicle's technologies and instruments were developed by Chinese researchers, according to the China Ship Scientific Research Center.

Sylvia Earle, former chief scientist of the United States National Oceanic and Atmospheric Administration, told Xinhua News Agency last year that the world is currently in the "greatest era of exploration ever" thanks to advances in new technology.

China had a history of being a world leader in ocean exploration, and now it is also leading the world in certain aspects of deep-sea exploration, she said.