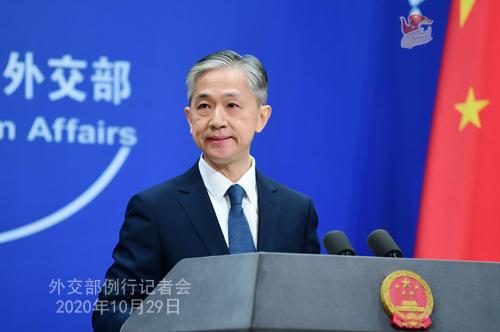 Beijing expressed strong opposition on Thursday to Washington's smearing of the country's efforts to track down international fugitives and recover their illicit gains, warning the United States not to become a "safe haven for criminals".

Foreign Ministry spokesman Wang Wenbin made the remark after the U.S. Justice Department charged eight people for their participation in a Chinese government operation known as "Fox Hunt", a campaign targeting economic crime suspects who have fled overseas.

Five people, including three Chinese nationals, were arrested in the U.S. on Wednesday.

The U.S. move disregards the basic facts and has ulterior motives, Wang said at a daily news briefing.

Cracking down on transnational crime, catching international fugitives and recovering illicit gains are just causes, and have been widely accepted by the international community, he said.

Also on Thursday, Wang slammed a U.S. move to designate the U.S. branch of the National Association for China's Peaceful Unification as a foreign mission and withdraw from an agreement to promote bilateral local-level cooperation, saying such a practice is political manipulation due to ideological prejudice.

U.S. Secretary of State Mike Pompeo said in a statement on Wednesday that the U.S. is discontinuing participation in the bilateral memorandum of understanding concerning the establishment of the U.S.-China governors forum to promote subnational cooperation.

Wang said that the U.S. move goes against the wishes of the two peoples to strengthen dialogue and exchanges.

Restrictions and discrimination against the association are unreasonable as it is a legally registered social organization aiming to promote the peaceful reunification of China and enhance friendship between the people of both countries, he said.

The unilateral U.S. withdrawal from the memorandum is an attempt to dismantle the bridge of exchanges between people from both countries, and such a retrogressive practice will be opposed by the two peoples, he added.