Young HK entrepreneurs are finding their feet in the Bay Area, where the digital economy has seen rapid transformation in recent years, stimulating the consumer market and creating jobs in the face of the COVID-19 threat.

When Ronald Cheng Pang-cheung chose to start a media company in Shenzhen in 2015 to help farmers in the remote regions of Guangdong province market their products, there was no such thing as TikTok and hardly any live e-commerce platforms on the internet.

The 27-year-old from Hong Kong had to rely on Tencent's WeChat public accounts, which, at that time, were criticized for being "unfriendly" to users wishing to put out a video.

Lacking business experience and funding, his enterprise was a non-starter and was soon tottering on the brink of bankruptcy. Not only did he fail to deliver farmers' produce to the tables of consumers, he couldn't make ends meet and had to survive on instant noodles for three months.

But his fortunes took a turn for the better a year later in the form of a viral video. A real-estate company asked Cheng to devise a marketing project concerning a show-business celebrity couple's divorce drama. So, he produced a show asking people in the streets whether they would choose a house or their children in a hypothetical divorce case.

The video, which sparked a heated debate, drew 30 million views within two days of its release on video hosting platforms, earning Cheng 1 million yuan (US$149,000) from investors and several media projects, including advertising, making web series and online movies.

Two years later, when the couple officially divorced, Cheng's company had landed on the emerging viral social networking service Douyin — the original and mainland version of TikTok. By then, he already had his finger on the pulse of the digital era.

"Fortunately, we're betting on the right track. As the TikTok accounts attracted more and more traffic in June last year, our team had grown from just three staff at the onset to more than 20 and finally got the business off the ground, managing more than 100 official accounts," recalls Cheng. 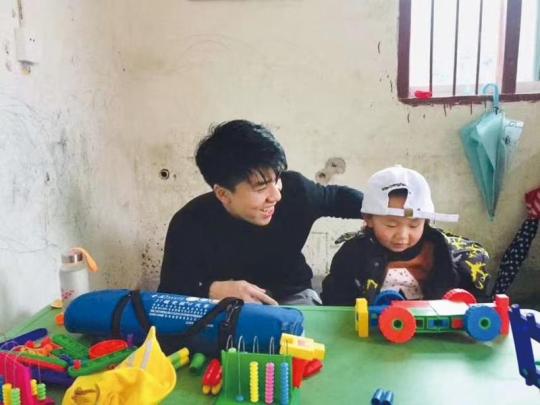 Volunteers of Barefoot, a volunteer group founded by Ronald Cheng Pang-cheung when he was a university student, teach and play with children at Zhangshu Elementary School in Ganzhou, Jiangxi province, in August 2019. [Photo provided to China Daily]

Cheng, now chief executive of Shenzhen-based Hugo Media Technology, says all one needs to do to lift off in business is to seize every opportunity that comes along and go for it. A successful project speaks for itself and clients will bring in other clients, allowing the business to grow naturally.

Sitting on one's laurels won't work, he believes. Cheng and his team always maintain a sense of crisis in such a competitive industry, where 3 to 5 percent of the top media companies can make the grade and survive.

Players in the field have to keep an eye out for hourly trends on different social media platforms and decide which ones are worth making a story about. Most of the topics don't last more than five hours, says Cheng.