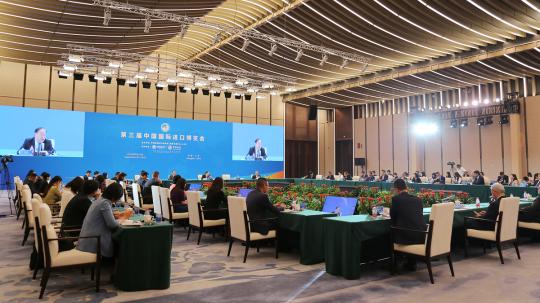 Business delegates attend the symposium for representatives of exhibitors attending the third CIIE, which was held for the first time on Sept 16, 2020. [Photo provided to chinadaily.com.cn]

The symposium for representatives of exhibitors attending the third China International Import Expo (CIIE) was held for the first time on Sept 16, a day following the 50-day countdown to the event.

The symposium was designed to be an open platform where business representatives can share insights into helping stabilize foreign trade and investment.

Wang said that holding the third CIIE as scheduled is of great significance as it will showcase China's achievements in both epidemic control and economic recovery. The expo will also demonstrate China's commitment to further opening-up to the outside world and convey the nation's message that it will support international collaboration in epidemic control and safeguard a multilateral trade system, he added.

Wang said that the expo will help stabilize foreign trade and investment, industrial and supply chains, and boost the "dual circulation" development pattern, which takes the domestic market as the mainstay while allowing domestic and foreign markets to strengthen each other.

He expressed hope that companies attending the symposium would play a leading role in helping improve CIIE's international influence and industrial appeal and contribute to the sustainable development of the CIIE.

During the symposium, Fabrice Megarbane, president and CEO of L'Oreal China, praised China's commitment to holding the third CIIE as scheduled, saying it showcases the country's positive attitude to boosting world economic recovery.

Cao Yang, president of Baker Hughes China, stressed that the CIIE provides an important opportunity for companies to strengthen their commitment to the Chinese market.

According to the CIIE Bureau, all preparations for the third CIIE are taking place smoothly. The work of attracting exhibitors is almost complete, and the focus has been shifted to buyers recruiting and expo organizing.

The booked exhibition area for this year has already surpassed what was planned. The number of Fortune 500 companies and industry leading companies attending the third CIIE is almost identical to that of last year. Many of the world's top 10 companies in sectors like pharmaceuticals, medical equipment, high-end consumer goods and automobiles have signed up for this year's expo. In addition, dozens of companies have applied to attend the expo for three consecutive years.

A special committee for consumer goods was set up at the National Exhibition and Convention Center (Shanghai) on the same day of the symposium. This committee will be a new member of the Third CIIE Enterprise Alliance.

Liu Fuxue, deputy director-general of the CIIE Bureau, said the committee will research industry trends for consumer goods, as well as display advanced technology and products. He hoped it will attract more top-quality businesses to enter the Chinese market, as well as boost the number and size of future CIIE exhibits.