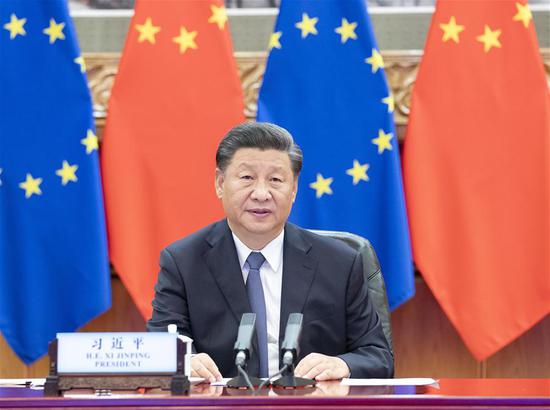 "The COVID-19 pandemic has accelerated the once-in-a-century transformations unfolding in the world and placed humanity at a new crossroads," said Xi.

It is important that China and the EU remain steadfast in pursuit of sound and steady growth of their comprehensive strategic partnership and adhere to four principles, namely peaceful coexistence, openness and cooperation, multilateralism, and dialogue and consultation, said Xi.

This year marks the 45th anniversary of China-EU diplomatic ties. Despite the pandemic of COVID-19, which is still raging globally, communication between China and the EU does not stop. The frequency and intensity of bilateral high-level exchanges speak to the strong commitment of China and the EU to promoting the partnership.

Observers held that though the world is undergoing huge changes, mutual benefits, complementarities, as well as dialogue and cooperation remain fundamental features in China-EU ties. Moreover, China and the EU have carried out effective anti-epidemic cooperation, which will inject impetus for them to promote ties in the future.

"We hail the frankness and pragmatic spirit in which this meeting took place. We believe that by bringing the commitment of cooperation into substantial dialogues, both Europe and China can benefit, share and learn a lot from each other," said Luigi Gambardella, president of ChinaEU, a business-led international digital association in Brussels.

During the meeting, the Chinese and EU leaders stated their commitment to speeding up the negotiations of the China-EU Bilateral Investment Treaty to achieve the goal of concluding the negotiations within this year.

The Chinese and EU leaders announced the official signing of the China-EU agreement on geographical indications.

"If China and the EU could finish the negotiations by the end of this year, it will be of special significance. It will send a positive message of China and the EU working together during the trying times, and give a strong boost to the business confidence on both sides. It will also contribute to the post-COVID-19 global economy recovery and to the concerted efforts to safeguard an open trade and investment environment," said Ambassador Zhang Ming, head of the Chinese Mission to the EU, at a briefing on the meeting on Sept. 11.

"They enjoy cooperation space as the two sides look forward to exploring opportunities in each other's market," said Chen Fengying, a researcher at the China Institutes of Contemporary International Relations, noting that mutual benefit is the essence of China-EU cooperation.

For China and the EU, cooperation is far greater than competition, while consensus far exceeds differences, said Chen.

In August this year, the China-Europe freight trains have maintained strong growth. The trips made and the volume of goods delivered were 1,247 and 110,000 TEUs respectively, up by 62 percent and 66 percent year on year. The growth once again indicates that economic globalization is an irreversible trend of the times as countries are economically interdependent with unprecedented integration of interests.

In the meeting, Xi said under the current circumstances, it is only more imperative for China and the EU, as two major forces, markets and civilizations, to inject more positive energy into COVID-19 response efforts, economic recovery and championing justice in the world.

Xi stressed China is ready to work with the EU to step up dialogue and coordination at bilateral, regional and global levels, stay committed to a global governance outlook featuring consultation, contribution and shared benefit, defend the international order and system with the United Nations at the core, promote the political settlements of international and regional hot-spot issues.

For their parts, Merkel, Michel and von der Leyen said it is imperative for Europe and China to strengthen cooperation, jointly safeguard multilateralism, resist unilateralism and protectionism, and respond more effectively to various global challenges.

The European side is willing to strengthen cooperation with China in international organizations, promote anti-pandemic international cooperation, maintain free trade, and promote the economic recovery in Europe, China as well as the world at an early date, said the European leaders.

"The slowdown caused by the pandemic also holds a lot of potential that must now be tapped together," Robby Schlund, member of the German Bundestag, told Xinhua that it is particularly important to stress that people should support good relations in the sense of economic multilateralism for mutual benefits.