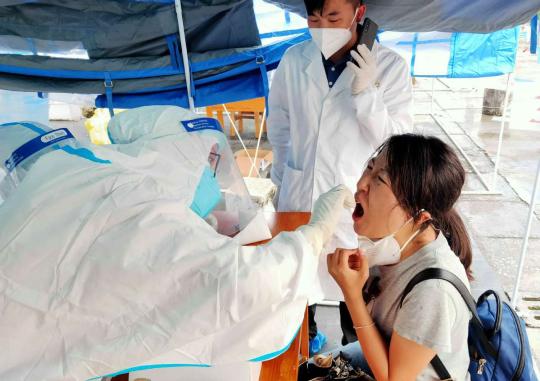 Ruili city in Yunnan province has locked down all border villages and blocked cross-border movement after two imported COVID-19 cases from Myanmar were confirmed over the weekend.

According to a notice released by the city's epidemic control command center on Sunday, the number of residents in bordering villages and their movement should be clearly recorded. Any cross-border visits to family members or friends are now prohibited.

The local government has also stepped up efforts to crack down on illegal crossings and to persuade illegal immigrants to return. Those who violate the rule will be handled by local public security, the notice said.

A citywide screening campaign that targets illegal immigrants in particular will be rolled out to identify hidden risks of the virus' spread and strengthening awareness about disease control measures.

Meetings will be reduced and large gatherings, including the city's live broadcasts and trading activities for jade and jewelry, will be halted, the notice said.

All weddings will be delayed, and funerals will be held in a simple manner, it added.

Mask-wearing will be mandatory in all public spaces, including supermarkets, hotels and workplaces. A variety of virus control policies, such as taking temperatures, conducting disinfections and presenting health codes will also be strengthened.

Both are from Myanmar and arrived in Ruili recently. One was identified as an imported asymptomatic case on Saturday and reclassified as a confirmed case on Sunday.

The two patients are now receiving treatment at a hospital, and all close contacts have been placed under medical observation.

As of Sunday, there were seven imported confirmed cases in Yunnan, including one in critical condition. Five asymptomatic cases are under isolation.

Ruili's epidemic control command center also released a notice on Saturday, saying that a residential block will be placed under lockdown starting at 6 pm that day, in response to the detection of a suspected case in it. No residents or vehicles are allowed to leave, it said.

Another notice released around the same time said that residents in a residential block nearby should abide by home-based isolation requirements as of 6 pm that day.

China has reported no new locally transmitted cases for 29 consecutive days as of Sunday, but there is a steady number of new imported cases found in arrivals on a daily basis.

On Sunday, the Chinese mainland reported 10 new confirmed cases, all travelers from overseas.

While airline passengers arriving in the country will be managed in a closed-off loop to stem potential risks of the virus' spread, border control officers said previously that regions with land crossings are more susceptible to new infections from overseas as some illegal immigrants may take advantage of small and hidden alleys.