Huawei wants 200 million devices powered by HarmonyOS in a year 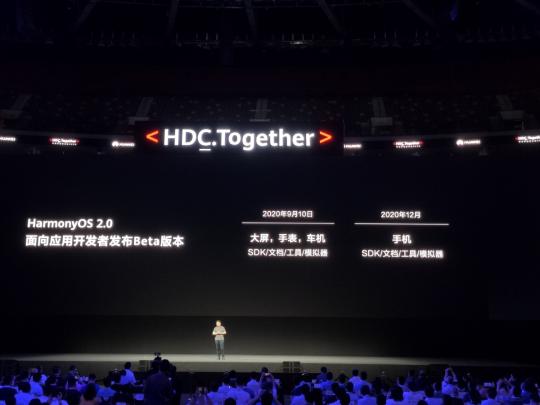 Huawei Technologies Co aims to have more than 200 million devices and equipment powered by its in-house operating system HarmonyOS in a year, as the Chinese tech giant works hard to build its own globally competitive software ecosystem.

Yang Haisong, vice-president of software department at Huawei's consumer business group, said the goal is to have 100 million units of Huawei's own devices and equipment equipped with HarmonyOS in a year. The company hopes the other half of the 200 million devices powered by the system would come from third-party companies.

Yang made the comments at the sidelines of the ongoing Huawei Global Developers Conference in Dongguang, Guangdong province.

HarmonyOS is already used in Huawei's smart TV products. On Thursday, the Chinese tech giant announced an update, HarmonyOS 2.0, which is planned to be used in devices such as Huawei's smart watches and in-car systems, as well as home appliances from third-party companies.

Notably, Yu Chengdong, CEO of Huawei's consumer business group, said HarmonyOS will start being used in its smartphones next year. It is not immediately clear what proportion smartphones would account for the company's goal of 200 million devices.

Regardless, Huawei is moving ahead to partner with third-party companies to increase the use of HarmonyOS. The Shenzhen-based company has already partnered with leading Chinese home appliance manufacturers such as Midea Group, Joyoung and Robam Appliances to promote HarmonyOS. These companies' products, including ovens and smoke exhaust ventilators, will be powered by HarmonyOS, and consumers can use Huawei's smartphones to control these products.

Analysts said such cooperation is in line with Huawei's overall strategy to build a smart internet of things ecosystem. HarmonyOS is built as a system for IoT — not just for smartphones. The wider use of the system in third-party companies showcases its popularity, analysts added.