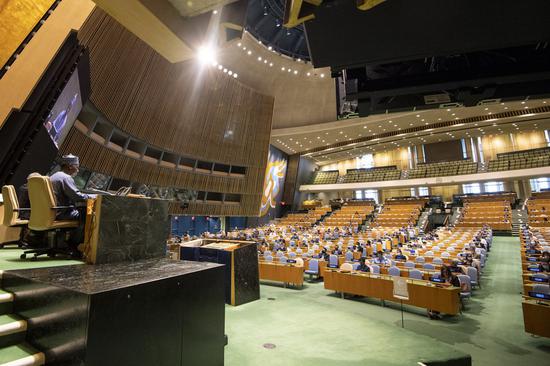 Coronavirus quarantine rules for visitors coming for the annual UN General Assembly gathering of world leaders later this month might mean this 75th anniversary session will be quite different, a UN spokesman said on Tuesday.

"This General Assembly will clearly be like no other," said Stephane Dujarric, spokesman for UN Secretary-General Antonio Guterres.

"I think we will have an opportunity to hear from world leaders on the state of the world in this dramatic time that we live in, and I think that is clearly worth tuning in and make it, you know, appointment television, so to speak," he told correspondents at a regular, virtual briefing.

The UN Secretariat has been encouraging the VIPs to pre-record their General Assembly statements, with a voluntary 15-minute maximum.

Another factor for encouraging recorded remarks at a limited gathering is that New York state has imposed 14-day self-quarantine on visitors from 35 U.S. states and territories. The airport authority has imposed similar strictures.

However, media reports have said U.S. President Donald Trump plans to address the annual meeting in-person on the opening day.

Dujarric said New York City has advised missions to the United Nations of its strict health protocols. Asked if delegates might claim diplomatic immunity, he advised checking with city and state officials.

A spokeswoman at New York City Hall, Siobhan Dingwall, said that they are required to follow New York state's guidance and self-quarantine.

All 193 member states have been told that they are only allowed one representative to sit in the General Assembly hall at their designated place where there are places for six delegates for each country.