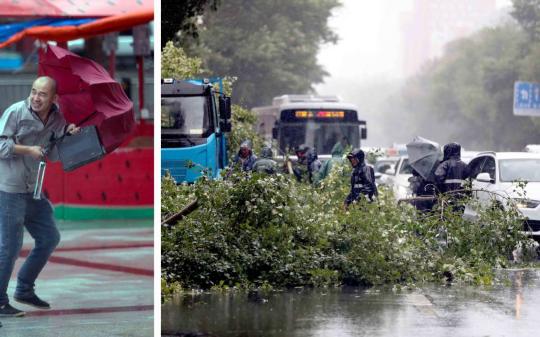 Left: Strong winds ruin the umbrella of a resident in Changchun, Jilin province, on Tuesday. Typhoon Haishen brought strong winds and rains to many areas in Jilin. Right: Workers clear branches in a street brought down by winds in Changchun. (WANG QIANG/FOR CHINA DAILY)

Typhoon Haishen－the 10th typhoon of the year－that landed on the southern coast of South Korea on Monday morning, has weakened to become a tropical storm, but the gales and torrential rains it brought hit vast northeastern China, triggering school suspensions on Tuesday.

It will continue to weaken as it moves northwest with lesser influence on the northeastern region, the National Meteorological Center said on Tuesday, adding that the areas will still witness gales and torrential rains until Thursday.

The NMC warned local authorities to strengthen preparations to reduce losses, considering that two typhoons had hit the regions days before.

The education bureau of Changchun, capital of Jilin province, requested all primary and secondary schools and kindergartens in the city to suspend classes on Tuesday due to the typhoon, and nearby cities like Jilin and Yanbian issued similar notices to suspend classes.

The city of Hunchun in the Yanbian Korean autonomous prefecture upgraded its emergency response for floods and typhoons to Level II, the second-highest in the country's four-tier emergency response system, and relocated 1,499 residents on Monday.

The Heilongjiang Provincial Department of Agriculture and Rural Affairs issued guidelines on Monday evening, including various concrete measures to ensure the safety of agricultural production.

For example, the document said agricultural experts should be organized to scientifically assess the impact of disasters and implement production recovery measures depending on local conditions.

Jilin province is also facing the high risk of flooding and mountain torrents, as soil has already been saturated due to the heavy rain brought by previous typhoons, Han Mu'en, head of the provincial water resource department, said at a news conference on Sunday.

Compared with other provinces in eastern and southern China, typhoons are less common in Northeast China.

However, the series of three typhoons－Bavi, Maysak and Haishen－brought heavy rain and strong wind to the region within half a month.

Meteorological experts explained it was mainly the subtropical high pressure that caused the three typhoons to move northward.

"Around 577,000 hectares of fields were affected, 90 percent of which are planted with corn."