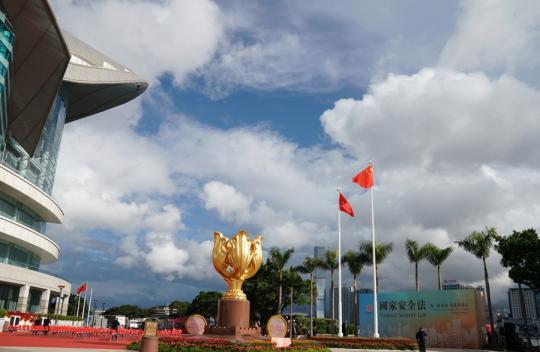 Photo taken on July 1, 2020 shows the Golden Bauhinia Square after a flag-raising ceremony held by the government of the Hong Kong Special Administrative Region to celebrate the 23rd anniversary of Hong Kong's return to the motherland in Hong Kong. [Photo/Xinhua]

Legal experts in Hong Kong on Wednesday said it is incorrect to call Hong Kong's political framework a "separation of powers" as the city, a special administrative region of China, is not an independent political entity and all of its powers come from the central government.

What Hong Kong does have is a political setup that allows its executive, legislative and judicial branches to maintain checks and balances as well as cooperation, they held.

The remarks came after Chief Executive Carrie Lam Cheng Yuet-ngor and Education Secretary Kevin Yeung Yun-hung on separate occasions supported the removal of the phrase "separation of powers" from the Liberal Studies teaching materials that have been reviewed by the Education Bureau.

A more accurate way to view the relationship among the three branches of the government is that they perform their respective duties, exercise checks and balances, and cooperate with each other, Lam said.

However, it does not mean that there is no division of power and checks and balances among the three branches in practical governance and operation, Tong said. For example, he said, one of the powers and functions of the Legislative Council is to examine and approve the budget proposed by the government.

He rejected some claims by local opposition politicians that "separation of powers" is a principle of common law jurisdictions and that to deny it would harm the independence of the judiciary.

He said such statements were "deceiving and misleading the public" as not all common law countries observe a strict distinction between powers. For example, in the United Kingdom's parliamentary system, the executive branch is not separated from the legislature, since Cabinet members are drawn from Parliament, he said.

Tong suggested that after the revision of the textbooks, the government should promote public awareness of the Basic Law and Hong Kong's constitutional order and prevent people from being misled by false claims.

Under the Basic Law, the chief executive represents the HKSAR and is also the head of the executive branch. However, the power of the chief executive is not unlimited as he or she must govern in accordance with the law and is subject to oversight by the legislature, Tam said.