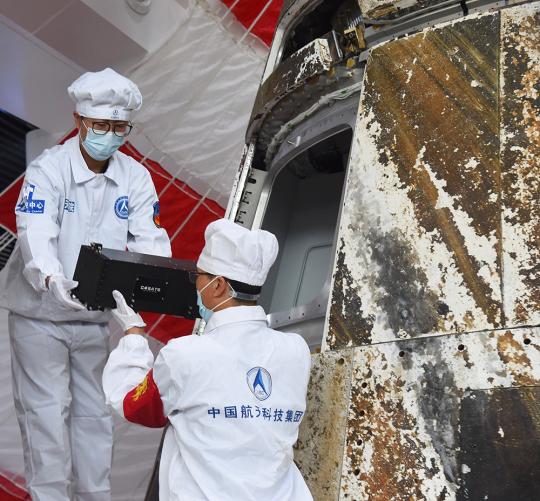 Workers retrieve space experiments from the re-entry module of China's new-generation manned spacecraft prototype during a ceremony in Beijing on May 29. （SU DONG/FOR CHINA DAILY）

China's spacecraft are best known for such things as deploying astronauts, studying Earth and transmitting signals, but some also carry out missions neither well-known nor usually attributed to space exploration. One such mission is helping to improve the quality of dairy products.

At least five types of forage grasses have been created through space-based breeding programs to develop beneficial mutations. The results of the programs, created by Chinese researchers, have been approved by the government for use in nationwide or provincial-level planting, according to an academic workshop on space breeding for forage grass that was held in Lanzhou, Gansu province, over the weekend.

Consequently, the quality of their dairy products will be substantially improved with production increased, experts said at the meeting, adding that hog or sheep farmers will also benefit from the use of space-bred grasses.

Space-based mutation breeding refers to the process of exposing seeds to forces such as microgravity, vacuums and cosmic radiation during a spaceflight and then sending them back to Earth for further observation and planting.

Researchers observe and examine several generations of plants grown from space-bred seeds and investigate their mutations－some are positive and desirable while others negative. Those with positive mutations will be kept and analyzed, and, after their certification and approval, they will be introduced to farmers.

Most alfalfa seeds, used to grow an important forage crop, are now imported because foreign seeds are generally better than domestic ones, according to Yang Hongshan, chief forage grass researcher at the Lanzhou Institute of Husbandry and Pharmaceutical Sciences under the Chinese Academy of Agricultural Sciences.

But the application of space-based mutation breeding is very helpful in improving the quality of Chinese alfalfa seeds, he said.

China conducted its first space breeding experiment in 1987, using a satellite to carry seeds into space.

In 1992, researchers put forage grass seeds on the country's 14th recoverable satellite. Since then, more than 100 kinds of seeds and seedlings of forage grasses have traveled with more than 30 Chinese spaceships, including the Shenzhou X and XI manned spacecraft and Tiangong I space lab, according to Liang Xiaohong, executive vice-chairman of the China High-Tech Industrialization Association, a Beijing-based society that held the workshop.

He said that the most recent space breeding experiment that involved forage grass was done with the re-entry module of China's new-generation manned spacecraft's prototype, which was launched on May 5 and returned to Earth about three days later. Twenty types of grass seeds were placed inside the module.

In addition to forage grasses, space breeding has helped to produce more than 200 new types of mutated plants in China that have been approved for large-scale cultivation, ranging from grains to vegetables and fruits, Liang noted.

Zhao Hui, a researcher at the association who studies space-based mutation breeding, said space breeding can generate mutants faster and more conveniently than ground-based experiments and can bring about some desirable traits that are hard to introduce otherwise.

He said that many kinds of crops such as wheat and tomatoes that were bred in space have been in domestic markets for a long time.