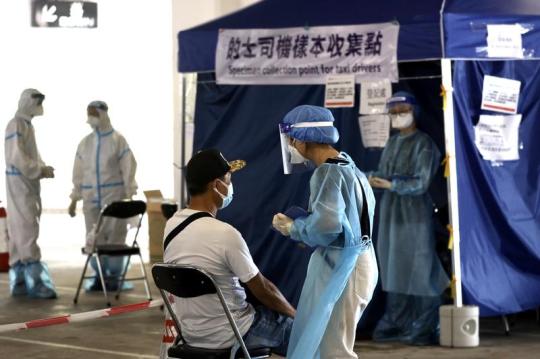 A health worker prepares to take a swab sample from a taxi driver to test for COVID-19 in Hong Kong, July 24, 2020. [EDMOND TANG / CHINA DAILY]

More than 420,000 Hong Kong people had signed up for the city's voluntary COVID-19 testing program by 6 pm Sunday, a day after it opened for booking, the government said.

Applicants described the registration process as simple and smooth, and medical experts said the number of registrations indicates a good start of the testing program, which is scheduled to begin on Tuesday.

On Saturday, the first day of registration, 80 out of the 141 testing stations have been fully booked, a government statement reads.

Warwick Wan Wo-Tat, a North District councilor, said around 400 residents had sought his help in online booking over the past weekend. He added that the registered residents are not just the elderly, but include laborers.

Wan noted that many venues in his district were already fully booked in the first two days and called on the authority to set up more testing stations to meet the demand.

Tommy Wong, a 58-year-old business owner in Hong Kong said he had booked for testing as soon as the registration period began. "The online booking system is very convenient－It only took me around two minutes," Wong said.

Wong added that he will let all his staff members test for the virus during office hours without deducting from their salary, as it is for the sake of the "public good".

Grace Li Fai, Chief Executive Officer of Altru Nursing Home, who also registered for the universal testing, said she had encouraged her employees not to miss this "golden chance" for virus testing, even though they had already undergone two virus tests before.

Infectious disease expert Joseph Tsang Kay-yan told China Daily that the registration figure is a positive sign for the testing program. He estimated that with that momentum, around 2 million people could get tested, which would help identify and isolate asymptomatic patients.

He appealed for more young people to participate in the program, citing a World Health Organization official's remarks in August that the novel coronavirus is being spread largely by asymptomatic young people.