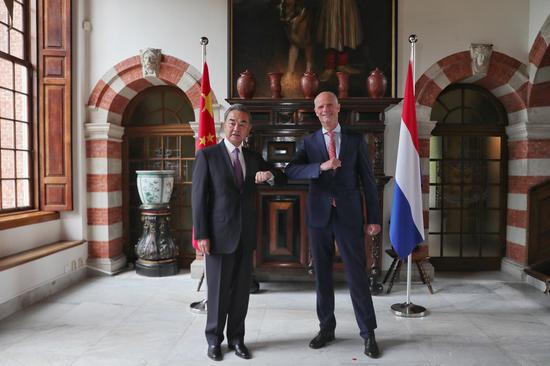 Visiting Chinese State Councilor and Foreign Minister Wang Yi and Dutch Foreign Minister Stef Blok pose for a photo before their talks in the Hague, the Netherlands, Aug. 26, 2020. (Xinhua/Zheng Huansong)

He made the remarks while meeting with Dutch Foreign Minister Stef Blok on the second leg of his European tour.

Without multilateralism, the world would be dragged back to "the law of the jungle," which is to reverse the course of history, he added.

Meanwhile, Wang called on China and The Netherlands to set an example for safeguarding free trade.

Globalization represents an inevitable trend of human development and a manifestation of social progress, he said, adding that The Netherlands advocates free trade while China is also a beneficiary of free trade.

The two countries should jointly promote the reform of the World Trade Organization (WTO) so that the WTO will continue to play its role as the cornerstone of the free trade system, he said.

Wang also called on both countries to set an example for ensuring mutual openness.

Openness is a foundation of The Netherlands and also China's consistent policy, he said, adding that adhering to mutual openness is key to the common progress of the two countries.

China, he added, will build a new open economic system at a higher level and is willing to share its market opportunities with other countries.

Also, China and The Netherlands should set an example for advocating fair competition, Wang said.

He expressed the hope that all parties will adhere to the principle of fair competition, give full play to the decisive role of the market in allocating resources, and provide a fair, just, open, and non-discriminatory business environment for enterprises from all countries. Enditem