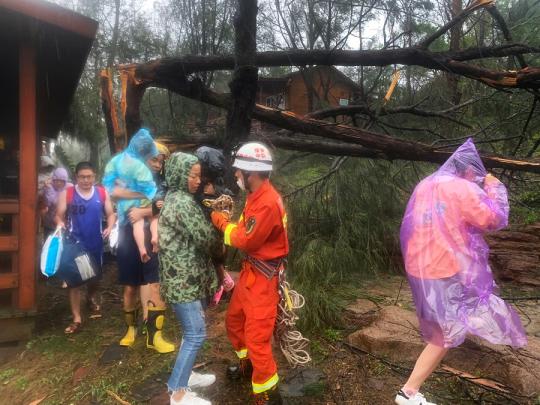 Typhoon Mekkhala slammed into the coastal cities of Fujian province on Tuesday, bringing with it damaging winds and torrential rain.

Mekkhala made landfall in Zhangpu county at about 7:30 am, bringing gales up to 119 kph, China's National Meteorological Center said. The province issued its second-highest emergency response notice.

Gales and heavy rain toppled trees and houses and trapped tourists in Zhangzhou, which administers Zhangpu.

Mekkhala weakened into a strong tropical storm on Tuesday but was still producing heavy rains. No casualties had been reported by Tuesday evening.

On Monday, the national observatory issued a yellow alert-the third-highest in a four-tier system-for Mekkhala, which was forecast to bring gales to China's eastern and southern coastal regions as it moved inland on a northerly track.

The roofs of some wooden houses at a tourist site in Zhangpu were torn off by gales. Thirty tourists who were temporarily trapped at the tourist site were evacuated.

In Zhangzhou, the storm caused traffic chaos when many streets were flooded, trees were uprooted, billboards blown down and some vehicles parked on the street were damaged.

An adult and two children stranded when a tree fell across their car were rescued by firefighters, said Tu Linfa, an official at the city firefighters bureau.

In Zhangzhou alone, 12,235 residents were evacuated from low-lying areas or potentially dangerous situations and 1,340 vessels returned to sheltered harbors by Tuesday.

In Zhangpu, more than 34 coastal scenic spots were closed and passenger ferries were ordered to suspend their service, government officials said in a statement.

At least 109 inbound and outbound flights were canceled in Xiamen and Quanzhou, according to Xiamen Airlines.

A total of 345 engineering projects and construction sites in the coastal areas of Zhangzhou were also required to temporarily close.