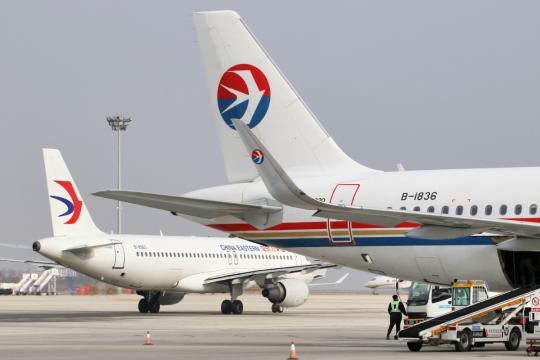 China Eastern aircraft on the tarmac at the international airport in Yantai, Shandong province. [Photo by Tang Ke/for China Daily]

China's air travel demand has recovered significantly since June with a continuous increase in the volume of flights, according to the Civil Aviation Administration of China (CAAC).

In June, China's civil aviation industry handled 325,000 flights, accounting for an average of 10,820 flights daily, up 14.1 percent from May, statistics from the CAAC showed.

A total of more than 30.73 million air passenger trips were made in June, a 10.2 percent month-on-month increase.

In July, the country's civil aviation industry handled a total of 370,000 flights, with an average daily volume of 11,941 flights.

A total of more than 36.99 million air passenger trips were made in July, a 20.35-percent increase compared with June, according to CAAC statistics.