5m urban jobs created in first half of the year 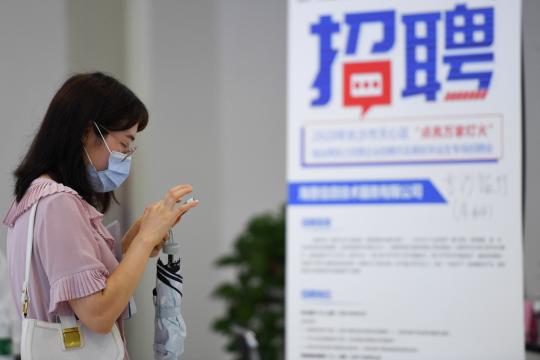 A job seeker checks her phone at a job fair in Tianxin district of Changsha in Central China's Hunan province, on July 30, 2020. [Photo/Xinhua]

A total of 5.64 million new jobs were created in China's urban areas in the first half of the year－63 percent of the annual target－as the country experiences a steady recovery in its job market amid containment of the COVID-19 pandemic.

Zhang Jinan, who leads the Ministry of Human Resources and Social Security, said on Saturday that the government will maintain policy support to boost recruitment demand, which has grown year-on-year since May.

The impact of the pandemic saw the country record just 390,000 new jobs in urban areas in February, but the number of new jobs added each month recently was around 1 million, he said.

The surveyed unemployment rate in urban areas hit 6.2 percent in February but dropped gradually in the second quarter and was 5.7 percent in June, he said.

The country reported 2 percent year-on-year growth in recruitment demand in May, marking the first month of positive growth since February. Demand continued to recover in June, Zhang said.

He said "the gradual recovery of employment in China beat expectations and was a hard-earned result" thanks to a series of measures the government had rolled out, such as cutting social insurance contributions paid by enterprises.

In the first half of the year, enterprises across the country were exempted from paying 576.9 billion yuan ($82.8 billion) of endowment, unemployment and work-related injury insurance and were allowed to postpone payment of another 43.1 billion yuan.

"With the validity period of relevant policies to be extended, enterprises are expected to be exempted from a total of over 2 trillion yuan of financial burdens this year," Zhang said.

He said some special measures had been taken to boost the employment of migrant workers and poverty-stricken people.

Over 6 million migrant workers who had been stuck at home due to epidemic control measures introduced around the time of Spring Festival had returned to their jobs thanks to "point-to-point trips" arranged by the government, he said.

By the end of June, over 28.3 million people listed as poverty-stricken had left their hometowns for work, more than all of last year, Zhang said.

However, he said "the task of stabilizing employment remains arduous with many uncertainties", especially since university graduates entered the job market this month and last.

The employment of laid-off workers, university graduates and migrant workers is a top priority in the government's efforts to stabilize the job market, and the government will roll out tailor-made measures to help them, Zhang said.

While encouraging enterprises to expand recruitment of college graduates, for example, the government would also create more opportunities for them to further their studies or receive training, he said.

Poverty-stricken people will be given priority when the government arranges jobs, organizes training and dispatches employment subsidies for migrant workers. The government will make all-out efforts to enable such people to find jobs in their home areas, he said.

According to this year's Government Work Report, China aims to add over 9 million new urban jobs in 2020 and keep the surveyed urban unemployment rate around 6 percent.