Tours to Wuhan picking up after recovery from virus 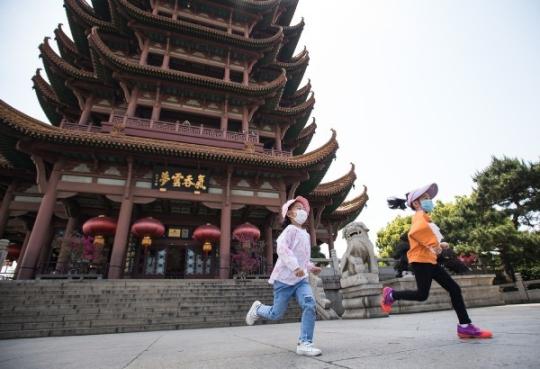 Tourists from other parts of China have shown great interest in visiting Wuhan, Hubei province, since tour operators from other provinces have been allowed to resume organizing outings to help travelers discover the beauty of the city following its recovery from the novel coronavirus outbreak.

On Saturday, buses carrying about 500 tourists from Henan province arrived at the Mulan grassland scenic site in Wuhan. It was the largest group of tourists from another province the city had received since Hubei decided to reopen its tourist market to tour operators nationwide on July 17 after its epidemic control situation stabilized.

Wuhan, the city hardest-hit by the COVID-19 outbreak in China, was locked down on Jan 23. As a result, tour operators were banned from organizing any visits to the city. Since June 2, all districts in Wuhan have been categorized as low-risk areas.

"Although the city was reopened on April 8, people still had doubts about whether the city was safe or the if outbreak might rebound, so there weren't many tourists back then. Now their doubts have been cleared," Lu Ming, the assistant to the deputy manager of the Mulan grassland, said on Sunday.

As required by the city government, the scenic site must keep the number of visitors below half its designed daily capacity as part of ongoing epidemic control measures, Lu said.

"Even under such a restriction, the number of tourists from other provinces has, since July 17, reached 80 percent of what it was during the same period last year," Lu said. "There is no doubt that we will receive more visitors from all over China in the future."

Jia Chao, manager of a tour operator from Zhumadian, Henan, visited Wuhan in advance to see the epidemic control situation in the city for himself before organizing a 57-person tour group.

"The routine daily disinfections in the hotel even included bleaching the door handles of the rooms, which made me and the guests feel reassured about Wuhan's epidemic control efforts," Jia said.

Many people have learned more about Wuhan after seeing it almost every day in the news as the city fought against COVID-19. Because they also witnessed the city's recovery, Jia said he's not surprised to see how popular tours there have become since the city is clearly back on track.

"I published the itinerary of the tour on Thursday afternoon, and all spots were filled by Friday morning," she said.

By Friday, more than 80 percent of the 425 star-rated hotels in Hubei had resumed operations, and 339 of the 421 A-class scenic spots in the province were open to tourists, according to the provincial government.