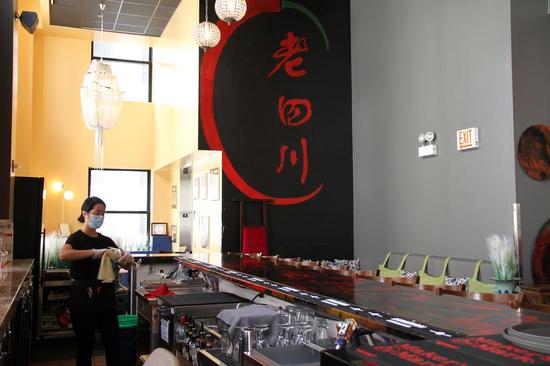 He could stay at home and live on government aid to tide over the COVID-19 pandemic prevailing in the United States, but Edison Feng chose to work.

As the general manager of Lao Sze Chuan Chinatown restaurant in U.S. city of Chicago, Feng admitted that he felt a bit nervous working during the pandemic. "But lots of clients ask us to keep open for business," Feng said. "We learnt protection knowledge and experience from China, and had strict precautions by requiring staff and their family members being in healthy condition and having no case contact before they can work."

Tony Hu, founder of Lao Sze Chuan, told Xinhua that his restaurant began to feel the negative impact of COVID-19 in January. "An important indicator was the number of tourists (visiting the restaurant) decreased significantly."

To reduce the loss, Lao Sze Chuan rolled out braised snacks for takeaway. At the same time, it initiated a "We Love Chinatown" campaign, inviting city officials and local mainstream media to dine in restaurants in Chinatown and hoping to attract more people to Chinatown.

In the meantime, Hu organized a fundraising at Lao Sze Chuan in downtown Chicago, and raised 77,000 U.S. dollars to purchase medical masks, protective suits, and respirators for hospitals in Sichuan, Hubei and Beijing in China.

The fatal attack came when COVID-19 began to hit the United States in March, and the city government of Chicago ordered closing of restaurants on March 20, with exception of takeaway.

"Most of our restaurants closed door and stopped takeaway service, out of concern for the safety of the staff," Hu said. "But lots of our old clients, frontline workers in particular, hope we can provide service." Thinking twice, Lao Sze Chuan in Chicago persisted.

And the Chinese restaurant has gone beyond that, it started to offer free lunches and dinners to frontline workers.

"They (frontline workers) are fighting the virus with their lives, we certainly should offer supporting service, providing them with warm and tasty dishes," Hu said.

Darren Zheng, general manager of Lao Sze Chuan Chicago Downtown restaurant, still remembers the day when a dozen medical workers from Northwestern Memorial Hospital came to his restaurant to pick up free meals. "One of them passed me an envelope, saying 'it's tip we medical workers for you, thank you'." Zheng refused the tip, and praised them as heroes fighting the pandemic and serving the community. "They are full of tears."

"The word I heard most (recently) is 'Thank you for opening'," Feng told Xinhua. "This makes me believe we have done the right thing."

"Love and trust are what I've felt and learnt during the pandemic," Feng said.