Urumqi outbreak expected to slow down 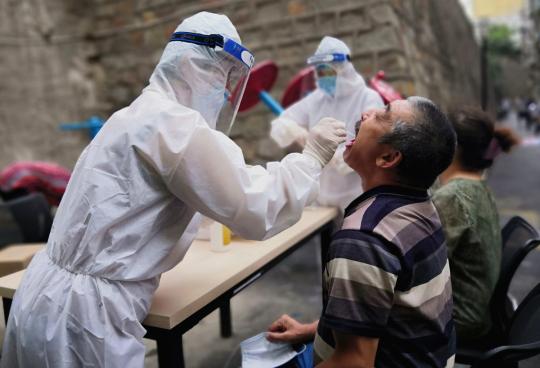 A medical worker collects a throat swab from a man at a residential community in Tianshan district, Urumqi, Xinjiang Uygur autonomous region, on Sunday as COVID-19 flares in the city. (SHI YUJIANG/CHINA NEWS SERVICE)

The latest COVID-19 outbreak in the Xinjiang Uygur autonomous region is expected to slow down in the coming days, said a public health expert at a virus control and prevention conference in Urumqi, the region's capital, on Monday.

Sixteen of the new cases were found in Urumqi and the remaining one, in southern Xinjiang's Kashgar prefecture, involved someone from the capital, according to its disease control and prevention center.

"Initial analysis indicates that new confirmed cases among those under medical observation should decline," said Rui Baoling, head of the center.

Rui said that the early Urumqi outbreak patients were all associated with a group gathering and their close contacts have all been identified and placed under medical observation.

On Saturday, Urumqi began free, citywide nucleic acid testing, beginning with neighborhoods that reported new cases and close contacts of known patients as well as residents with fevers. Residents were advised to stay at home, public transportation was reduced, and closed management of residential communities started.

The city's epidemic response headquarters issued a notice late on Monday saying visitors from outside the city would receive food, lodging and testing. Information support hotlines were also set up.

All of the confirmed and asymptomatic patients in Urumqi were admitted to a hospital in the city that specializes in contagious disease.

"Over 280 healthcare workers are working round-the-clock in the hospital, which has adopted a combined Western and traditional Chinese medicine approach to treatment," Song Yuxia, vice-president of the hospital, said at the conference.

"We have begun cooperation with experts from the State Council's Joint Prevention and Control Mechanism, and the diagnosis and treatment method will be optimized under their guidance in the following days," Song said.