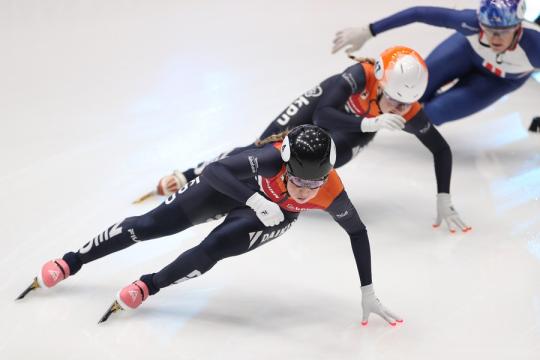 Lara van Ruijven (front) of the Netherlands competes during the Final A of the Ladies 500 meter race at the 2019-2020 ISU World Cup Short Track in Dordrecht, the Netherlands, Feb. 16, 2020. (Xinhua/Zheng Huansong)

The 27-year-old had been in a hospital in Perpignan, France since June 25, after falling ill during a training camp in the Pyrenees. She was diagnosed with an autoimmune disorder, placed in a coma and underwent surgery.

According to the Royal Dutch Skating Federation (KNSB), she died surrounded by her loved ones on Friday evening.

"The ISU is very saddened by the news of Lara's passing," said ISU President Jan Dijkema. "She had a bright future ahead of her in short track speed skating and the entire skating community is in shock and mourning this terrible loss. Our thoughts are with and we would like to offer our deepest sympathies to Lara's family, friends and teammates."

Van Ruijven had emerged as one of European brightest talents over recent seasons. she became the first woman from the Netherlands ever to win a world title, taking the 500m gold at the ISU World Short Track Speed Skating Championships 2019 in Sofia, Bulgaria.