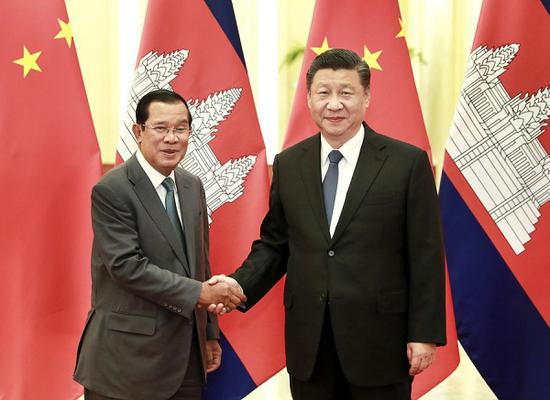 President Xi Jinping on Friday hailed the China-Cambodia community with a shared future as unbreakable as the nations have supported and closely coordinated with each other while making concerted efforts to fight the COVID-19 pandemic.

Xi, who is also general secretary of the Communist Party of China Central Committee, made the remark in a message to Samdech Techo Hun Sen, president of the ruling Cambodian People's Party and prime minister of Cambodia.

Xi said that he is glad to see that Cambodia, under the strong leadership of Cambodian King Norodom Sihamoni and the Cambodian government headed by Hun Sen, has made remarkable achievements in various areas.

China firmly supports Cambodia in following a path of development that suits its own national conditions, he said.

In his earlier message to Xi, Hun Sen lauded the achievements China has made in development, thanks to the long-term endeavor of the CPC in following the right path of development, and especially Xi's wise leadership.

He said China's position in the international arena is on the rise, and the country has played a leading role in solving major global issues. It has also served as a good example in its response to the pandemic and coping with international influences from the pandemic.

The relations between the CPP and the CPC are also being deepened, with the two parties conducting frequent exchanges and extending to each other steadfast support on issues concerning each other's core interests, he said.