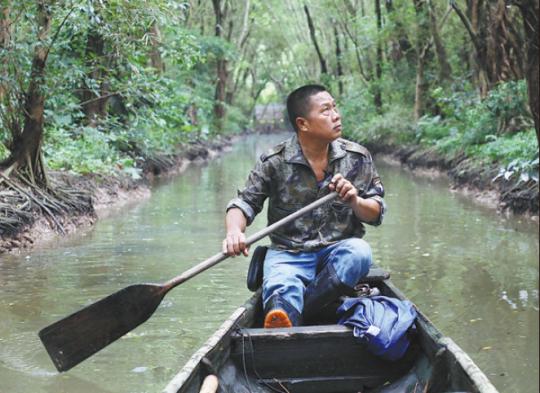 Xian Quanhui patrols the wood he has protected for the past 20 years in Foshan, Guangdong province. [Photo/Xinhua]

In the middle of the bustling factories and glitzy high-rises of Foshan is a unique bamboo forest, which has emerged as an oasis for thousands of birds.

Locals call it the "egret paradise", a secluded, lush wood the size of 16 soccer fields, in the Shunde district of the city in Guangdong province.

While the surrounding factories produce most of the world's air conditioners and microwave ovens, this green enclave is where about 20,000 egrets are born every year.

Wearing black rain boots, baggy jeans, and a worn plaid shirt, Xian Quanhui is the guardian of the forest. His efforts to create the micro wetland from scratch over the past 20 years won him the nickname "Uncle Bird of Shunde".

"There are many people in the world who have lots of money, houses and cars. I can't match them. But I have many birds, and that's something few can have," Xian said.

The 51-year-old worked as a building scaffolder, a profitable trade in the 1990s when China embarked on the path of rapid urbanization. To source inexpensive materials for construction site scaffolding, Xian signed a contract for a large tract of land in Shunde to plant bamboo in 1998.

But before his business could take off, birds landed in the forest－not a few, but large flocks of migratory birds, including night herons and egrets that were rarely seen locally.

Raised in the countryside, Xian made a decision to buy bamboo from other places and keep the birds' winter home.

To guard against bird hunters, Xian even dug a moat and planted banyan trees around the egret haven. He raised fish and shrimp as food sources for the birds and used the river to adjust the water level in the forest to simulate a wetland environment.

"In the beginning, the moat was to fend off the hunters but now it has become part of the ecosystem," he said.

The forest is also benefiting from the country's greater focus on environmental protection.

In 2013, Guangdong started a drive to create more wetland in and around its cities. Xian said the rise of urban wetlands and greenbelts has drawn more birds to the region. "The environmental law is enforced stringently, and people are paying greater attention to the environment. The bird hunters are gone and more people are joining the cause of bird conservation," he said.

The forest is now a bird-watching hotspot, drawing thousands of students, nature lovers and researchers every year.

The government of Shunde has designated it as a green zone under its protection to spare it from industrial, housing and commercial development. "In the past 20 years, I have witnessed how high-rises pop up and how my hometown was absorbed into the city," Xian said."Now, I want to preserve a place for our kids to get closer to nature and birds."