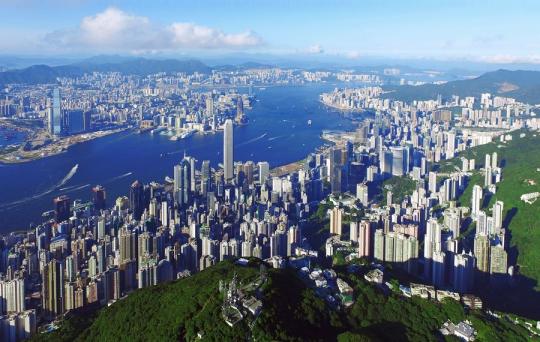 An aerial view of the Victoria Harbour in Hong Kong. (Photo/Xinhua)

Hong Kong's security chief said on Monday that the city's government has started preparatory work to implement the national security law for Hong Kong once it is enacted.

The law, which was approved by the National People's Congress on Thursday to close the special administrative region's legal loopholes in safeguarding national security, has won support from almost 3 million people in the city.

In an interview with Hong Kong newspaper Wen Wei Po, Secretary for Security John Lee Ka-chiu said that although the details of the national security legislation have yet to be finalized, his department has started preparations to make available the human and material resources for the law's implementation.

Lee also disclosed a plan to beef up training of the police to safeguard national security. Most of the force's work centers on maintaining public order, Lee said. Besides the case of banning the Hong Kong National Party, a local political group that advocated "Hong Kong independence" in 2018, it has relatively limited experience in handling national security-related crimes, he added.

Besides, the government will study other jurisdictions' experience in enforcing national security laws, and formulate policies to facilitate the law's implementation in the city, Lee said.

The law, which will outlaw acts of secession, subversion, terrorism and conspiracy with external forces, has received support from Hong Kong residents and representatives from various sectors.

By the end of Sunday, more than 2.9 million Hong Kong residents had signed a petition to support the national security law, according to the campaign's organizer.

On Monday, the presidents of five Hong Kong universities stressed the need for the law in the city. In a joint statement, they stated that the stability and prosperity of the SAR are of "paramount importance" for the future of the city's younger generation.

A day earlier, Hong Kong's top scientists underlined the law's importance for the city's technological advancement. In a statement, they said the city's hard-earned international reputation in education and research was one of the casualties of the social unrest that began last June.

The law is expected to restore a peaceful environment for education and research at universities, which will help scientists to make a greater contribution to the technological development of the SAR and the nation, they said.