Livestreaming week to kick off in Shanghai 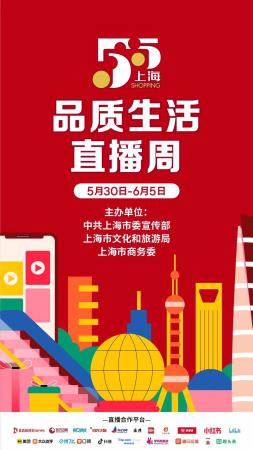 A livestreaming week will be held from May 30 to June 5 in Shanghai.

Companies from industries including tourism, entertainment, food, art, fashion and cosmetics have been invited by the municipal publicity department and the Shanghai Municipal Administration of Culture and Tourism to hold livestreaming shows to boost consumption.

The week, which is part of Shanghai's May 5 Shopping Festival, will be officially unveiled in the Shanghai Grand Theater on Saturday.

Shanghai-based Xiaohongshu – an e-commerce platform that combines lifestyle-sharing communities – will livestream for eight consecutive hours on Saturday. More than 30 celebrities, designers and brand owners will stage 21 livestreaming shows themed around culture, travel and design on the platform.

China's largest online travel agency Ctrip.com will be a part of the livestreaming week, during which it will hold livestreaming shows to offer heavily discounted hotel rates and tickets to tourist destinations.

According to the livestreaming report released by e-commerce giant Alibaba in late March, Shanghai ranks first among first-tier Chinese cities in terms of the audiences for livestreaming shows and the number of companies hosting such shows.