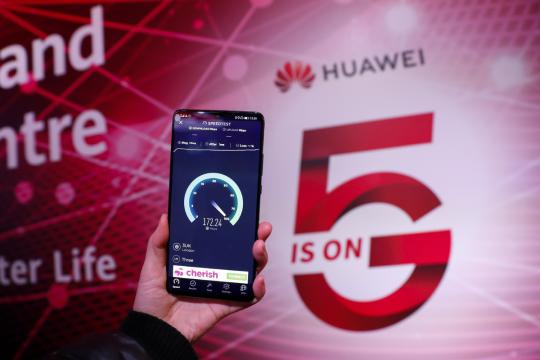 The vice-president of Chinese telecoms giant Huawei says he is happy to discuss any security concerns with British officials amid reports Prime Minister Boris Johnson plans a u-turn on his decision to allow the company a role in building the United Kingdom's 5G mobile phone network.

As recently as January, the government approved a limited role for Huawei, with Victor Zhang noting that "two UK parliamentary committees concluded there is no technical reason to ban us from supplying 5G equipment and this week the head of MI5 said there is 'no reason to think' the UK's intelligence-sharing relationship with the United States would be harmed if Britain continued to use Huawei technology."

But reports in recent days suggest there has been a change of heart, and Zhang told Newsweek these reports "simply don't make sense".

"As a private company, 100 percent owned by employees, which has operated in the UK for 20 years," he continued, "our priority has been to help mobile and broadband companies keep Britain connected, which in this current health crisis has been more vital than ever. This is our proven track-record."

However, the U.S. President Donald Trump has put pressure on allies not to get closer to China, and the Guardian newspaper reports that the U.S. will introduce sanctions later this year that could potentially lead to untested components being used in Huawei systems, leaving them open to the threat of security exploitation.

The novel coronavirus outbreak has added strength to a bloc in Johnson's own party opposed to China's involvement, leading to the reported change of heart.

"We are happy to discuss with NCSC (the National Cyber Security Centre) any concerns they may have and hope to continue the close working relationship we have enjoyed for the last 10 years," Zhang added.

There has been no official confirmation from the government yet, but one of the most vocal critics, former Conservative leader Iain Duncan Smith, said the media reports will be the start of a complete and thorough review of what he called the UK's dependency on China.

The decision would cause practical difficulties for Britain's leading mobile phone networks, and London aligning itself with Washington could have wider implications for relations between Britain and China, which have been carefully cultivated by successive British prime ministers for decades.

In a February 2019 BBC interview, Huawei's founder Ren Zhengfei said "the world cannot leave us because we are more advanced.

"If the lights go out in the West, the East will still shine," he said. "And if the North goes dark, there is still the South. America doesn't represent the world. America only represents a portion of the world."