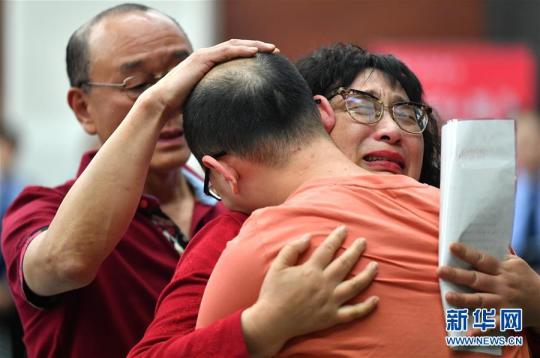 Mao Yin, who was abducted 32 years ago, reunites with his parents in Xi'an, Northwest China's Shaanxi province on May 18, 2020. [Photo/Xinhua]

A Chinese man reunited with his family Monday after being abducted as a toddler in Northwest China's Shaanxi province 32 years ago, police said.

At 3:30 pm, Mao Yin and his parents embraced at the Xi'an municipal public security bureau in the provincial capital.

"I would like to thank the tens of thousands of people who helped us," said Li Jingzhi, Mao's mother.

Born in February 1986, Mao was abducted when he was two and a half years old at the entrance of a hotel in Xi'an.

In the following years, police investigated and searched more than 10 provinces and municipalities for the child.

To find her son, Li quit her job and sent out more than 100,000 flyers. She also joined the volunteers in collecting information about missing children and providing it to the police. With her help, 29 abducted children have reunited with their families.

In late April, Xi'an police received tips saying a man from Sichuan province in Southwest China adopted a child from Xi'an years ago at the price of 6,000 yuan. After a series of investigations and comparisons, police found a man surnamed Gu from the Sichuan city of Mianyang resembled the missing Mao, which he was later proven to be by a DNA test.

"I can't believe that after helping 29 missing children find their families, I am able to find my own son," said Li, adding that she will continue to make efforts to fight against the crimes of abduction.

Mao said he would accompany his parents in Xi'an for some days before returning to Chengdu, the provincial capital of Sichuan, to deal with some of his own issues.

"To be honest, I'm not quite sure about the future yet," he said.

According to the Ministry of Public Security, more than 6,300 children who were abducted have been reunited with their families via DNA tests since 2019. The ministry launched the online platform Tuanyuan, meaning reunion in Chinese, in May 2016, which has helped find 4,385 missing children in the country.

Police is still investigating the details of Mao Yin's case.