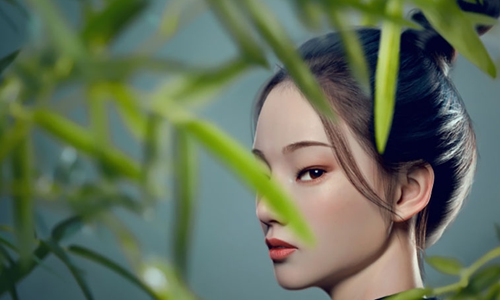 Ling's team will generate content around such characteristics as the national essence of Peking Opera and the combination of classic and modern fashion on social platforms like Weibo, Instagram, and Douyin, Xmov said in a statement.

With commercial programming, the 3D virtual figure will engage in business endorsements, live broadcasts, and participate in online and offline activities.

CEO and Xmov founder Chai Jinxiang said virtual IP value will be released at the maximum level via livestreaming and short videos.

The emerging virtual idol sector, backed by China's younger generation, has been on the fast development track in recent years, with more domestic internet firms increasing investment in this nascent sector.

Despite the size of China's virtual idol industry was less than 100 million yuan ($14 million) in 2018, with increased investment, it is expected to grow to 1.5 billion yuan by 2023, according to Newsijie.cn.

The virtual idol trend first originated in Japan, where the IP industry has thrived. Hatsune Miku, a virtual idol pioneer, is an anime character who sings through a vocal synthesizer. Miku has performed multiple times in China, singing in both Chinese and Japanese.

An investor in the TMT industry, who asked to remain anonymous, told the Global Times that with the development of 5G technologies and the improvement of holographic technologies, virtual idol character richness and interactive abilities will grow stronger.