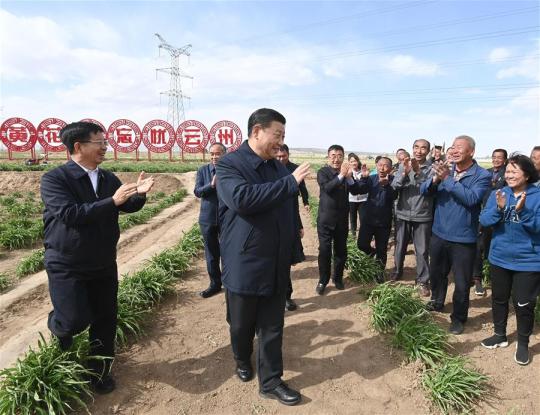 Chinese President Xi Jinping has stressed efforts to complete building a moderately prosperous society in all respects, and ride on the momentum to write a new chapter in socialism with Chinese characteristics for a new era.

Xi, also general secretary of the Communist Party of China (CPC) Central Committee and chairman of the Central Military Commission, made the remarks during an inspection tour in north China's Shanxi Province.

Xi called for efforts to overcome the adverse impacts of the COVID-19 epidemic and make greater strides in high-quality transformation and development to ensure that the target of poverty eradication is reached and the building of a moderately prosperous society in all respects is completed.

During the tour from Monday to Tuesday, Xi inspected work on coordinating the regular epidemic response with economic and social development, and on consolidating the poverty eradication results.

While visiting an organic daylily farm in Yunzhou, Datong City, on Monday, Xi said what he cares about the most after poverty eradication is how to consolidate the achievements, prevent people from falling back into poverty, and make sure rural people's incomes rise steadily.

He said an important benchmark to evaluate an official's job performance is to see the amount of good and concrete services he or she has delivered to the people.

When visiting a community of relocated villagers, Xi said relocation is not only about better living conditions but also about chances to get rich. He called for follow-up support to residents with tailor-made rural business projects to ensure sustainable development.

Highlighting that whether the people can benefit shall be a top concern, Xi demanded more supporting policies be put in place in terms of industrial development, financing, agricultural insurance, among others.

At the home of villager Bai Gaoshan, Xi chatted with Bai's family as they sat on a "kang" -- a bed-stove made out of clay or bricks in north China.

Xi said the CPC wholeheartedly seeks happiness for the Chinese people, having stopped collecting agricultural taxes and fees, helping the impoverished rural residents with housing and medical service, training them with skills, and finding ways for them to live a prosperous life.

"I believe our villagers will enjoy better days ahead," Xi said.

On top of that, he called for consolidating achievements in poverty alleviation, and then focusing on rural vitalization to ensure a better life for rural residents.

He then went on to visit the 1,500-year Yungang Grottoes, a "treasure house" of artifacts featuring elements blending Chinese and foreign cultures, as well as cultures of China's ethnic minorities and the Central Plains.

Xi stressed that historical and cultural heritages are irreplaceable precious resources, and protecting them should always be put in the first place in tourism development.

Noting that tourism should not be over-commercialized, Xi said tourism should become a way for the Chinese to understand and appreciate the culture of the nation and enhance their cultural confidence.

The historical implications of communication and integration behind the Yungang Grottoes should be further explored to enhance the sense of community for the Chinese nation, said Xi.

During a research tour in a stainless steel manufacturer in the provincial capital Taiyuan on Tuesday morning, Xi said products and technology are the lifeline of businesses, calling for more efforts in technological innovation to make a greater contribution to the development of advanced manufacturing.

He also called on businesses to strictly implement epidemic prevention and control measures to ensure the safety and health of their workers, while promoting the resumption of work and production to make up for the time lost.

Later on, Xi went to check the ecological protection work of the Fenhe River in the city, and urged the incorporation of environment protection, energy revolution, green development, and economic transformation.

After hearing the work reports of the CPC Shanxi Provincial Committee and the provincial government on Tuesday afternoon, Xi stressed that no relaxation is allowed in epidemic prevention and control, noting that efforts should be made to guard against both imported infections and domestic rebounds, improve regular prevention and control mechanism, and prevent new outbreaks.

Xi called for efforts on more promptly and effectively addressing the difficulties faced by enterprises in resuming production and operation, on solid implementation of all the policies and measures for expanding domestic demand, and on strengthening the competitiveness and quality of the real economy, especially the manufacturing industry.

Continuous efforts should be made to promote the adjustment and optimization of China's industrial structure, and scientific and technological innovations should be greatly enhanced to continue achieving breakthroughs in new infrastructures, technologies, materials, equipment as well as new products and business models, Xi said.

Xi also highlighted efforts to improve the country's system and mechanism for opening-up.

China will uphold the concept that lucid waters and lush mountains are invaluable assets, and steadily implement the national strategy for ecological protection and high-quality development of the Yellow River basin, he said.

More should be done to accelerate institutional innovation and strengthen the implementation of institutions to help form a green way of production and living, he said.

Efforts should be made to solidify the foundation for the development of agriculture and rural areas, beef up policy support for grain production and lift the remaining poor population out of poverty, Xi said.

Authorities should adhere to the people-centered development philosophy and ensure the bottom line of people's livelihood, Xi said. He added that efforts should be made to implement pro-employment policies and facilitate the employment of key groups such as college graduates, veterans, rural migrant workers and urban people facing difficulties.

Efforts should be expedited to improve the weak areas in the public health system exposed by the epidemic and shift the focus of social governance to the primary levels, Xi said.

The rich and colorful local history and culture as well as revolutionary cultural resources should be fully drawn on and used to promote cultural advancement, Xi said.