Courts have 'zero tolerance' for harm to health workers 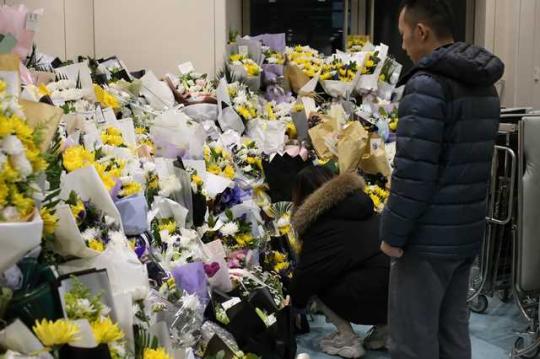 Bouquets are laid at the emergency ward of Civil Aviation General Hospital in Beijing to mourn Yang Wen, a doctor who was stabbed to death by Sun Wenbin, a patient's relative. (Photo by Wu Xiaohui/China Daily)

China's top court demanded on Monday that all courts should keep giving timely and harsh punishments with "zero tolerance" to those harming medical workers as a move to protect public health and promote development of the healthcare industry.

Given that a few doctors have been seriously attacked since the end of last year and some medical staff were injured during the outbreak of the novel coronavirus, the Supreme People's Court called for courts nationwide to strengthen the fight against offenders who disturb medical order or harm or kill medical workers.

It said that 189 defendants in 159 concluded cases were penalized for injuring or killing medical workers or seriously disturbing the medical environment from January 2019 to April this year.

It disclosed eight influential cases to the public, including two that involved the death penalty.

For example, Sun Wenbin, 55, who killed doctor Yang Wen at the Civil Aviation General Hospital in Beijing's Chaoyang district at the end of last year, was executed on April 3 after the top court approved his death sentence.

Sun attacked Yang because he thought Yang's medical treatment was ineffective for his ailing mother, according to a statement of the top court.

On Dec 8, Sun went home and picked up a knife, saying he would take revenge on Yang in the hospital. On Dec 24, while Yang was describing his mother's illness to him, he stabbed Yang in the neck several times, it said.

Yang was seriously injured and died the following day, it added.

About 20 days after Sun was executed, Ke Jinshan, 41, from Hubei, the province hit hardest by COVID-19, was sentenced to eight months in prison after he seriously disturbed medical order by hitting doctors and tearing their protective clothing when his father-in-law died of the disease on Jan 27.

"Ke injured a doctor's head and left arm and also created infection risks for medical staff, so his behavior constituted the crime of disturbing public order," the top court said. "But he was leniently punished because he pleaded guilty with a positive attitude."

China has taken measures in recent years to improve doctor-patient relationships and to prevent medical workers from being attacked. In December, the nation's top legislature adopted a new law on the promotion of basic medicine and healthcare, banning any organization or individual from threatening or harming the personal safety or dignity of medics.