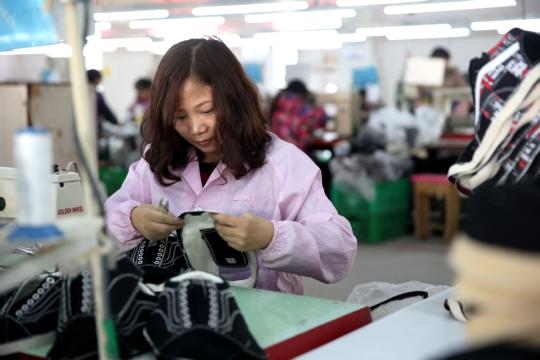 A worker makes a sneaker on a production line at a workshop, which was established to help alleviate rural poverty, in Huichang in 2019. (China Daily/Chen Zebing)

To ensure that people's lives have actually improved, China has introduced its strictest poverty alleviation supervision system ever, leaving no opportunities for administrators to fake results, a leading official said.

Provincial and central government work groups have even randomly selected villagers labeled as "out of poverty" in the national database and visited their homes unannounced to check the accuracy of the details filed, said Li Weiming, director of the poverty alleviation office in Huichang county, Jiangxi province.

"Such inspections have become routine. We only know the inspectors have visited the villagers after receiving assessment reports, so no officials dare file incorrect information to reach their poverty alleviation targets," he said.

Unlike previous measures, this time the central government is determined to ensure that people are genuinely free from poverty by conducting such inspections, he said.

The central government also requires teams from other counties, provinces and regions to inspect poverty alleviation efforts across Jiangxi to ensure that there are no loopholes or misconduct.

"The inspections have certainly put pressure on us, but it's our responsibility to make sure the achievements can stand the test of history. Poverty alleviation is never about figures, but about changing people's lives," Li said.

Meanwhile, poverty alleviation results have become key criteria for the promotion of officials. Last year, 28 officials in Huichang were promoted in recognition of their efforts to help villagers shake off poverty.

Conversely, 102 officials were disciplined for corrupt behavior or acting against people's interests during poverty alleviation programs.

Li said preventing people from slipping back into poverty will be as challenging as lifting the remaining impoverished population out of poverty by the end of the year.

"We will closely monitor changes in people's circumstances, such as illness and employment status, and provide assistance before they start to struggle," he said.

"Such a mechanism will become the norm once the country's poverty elimination goals have been achieved."