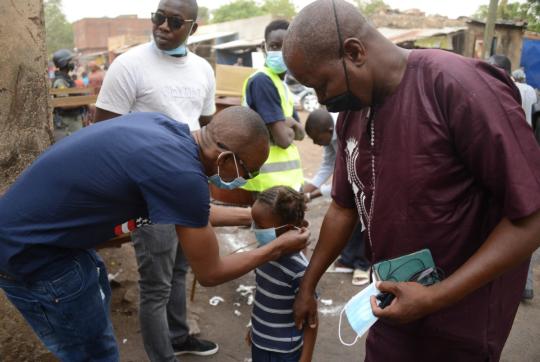 A staff member put on a mask for a child at a polling station in Bamako, Mali, on Sunday, during the second round of legislative elections in the country. (XINHUA/HABIB KOUYATE)

India recorded its biggest single-day spike in the novel coronavirus cases on Monday as the government eased one of the world's strictest lockdowns to allow some manufacturing and agricultural activity to resume.

An additional 1,553 infections were reported over 24 hours, raising the national total past 17,000.

Meanwhile, the governments of the states of Telangana, Punjab and Delhi have decided not to ease the lockdown restrictions despite the federal government's guidelines to gradually allow some economic activities starting from Monday.

In Japan, the authorities secured more hotel beds in response to the increasing number of new COVID-19 confirmed cases as the total number rose to 11,151 on Monday.

The government had secured over 210,000 hotel rooms to treat those patients, said Japan's Economy Minister Yasutoshi Nishimura, as a Kyodo News survey found that the hospital bed vacancy rate for patients suffering from the virus is less than 20 percent in urban areas.

Separately, the Japanese government will expand its new economic stimulus package to 117.1 trillion yen ($1.09 trillion) to fund cash handouts and ease the economic pain of the outbreak, sources close to the matter said on Monday.

In Israel, the government agreed on Sunday to ease economic restrictions as well as the closure, doubling the proportion of returned workers from 15 percent to 30 percent, as the country saw a smaller increase in the number of confirmed cases.

As a result, stores may reopen after following the rules of hygiene and social distancing. The government also allowed sports activities, involving up to two people, and prayers for up to 19 people, both up to 500 meters from home.

In New Zealand, the authorities will ease a nationwide lockdown next week after claiming success in stopping "an uncontrolled explosion" of the disease, Prime Minister Jacinda Ardern said on Monday.

And the country would move its maximum Level Four COVID-19 alert to Level Three from April 27 and remain there for two weeks to assess the situation, Ardern said.

The announcement means businesses deemed safe can reopen, along with some schools, limits on local travel are also relaxed and gatherings of up to 10 people allowed for events such as weddings or funerals. Social distancing rules will however remain.

Another batch of the materials will arrive in Egypt soon, and a third batch is under coordination between the two sides.

In Zimbabwe, President Emmerson Mnangagwa on Sunday extended the lockdown by two weeks to contain the spread of the outbreak, which has infected 25 people in the country and killed three.

He said the lockdown would continue as the country had not yet met conditions set by the World Health Organization to lift the measures.

Mali registered 224 cases as of Monday. On Sunday, the second round of legislative elections kicked off for voters to choose the remaining 125 of the 147 deputies for the country's national assembly.

The government urged voters to strictly respect the health guidelines. At the centers visited by the media, the security forces scrupulously ensured that people washed their hands and distributed masks at the entrance.

Wang Xuin Tokyo, Xinhua and agencies contributed to this story.