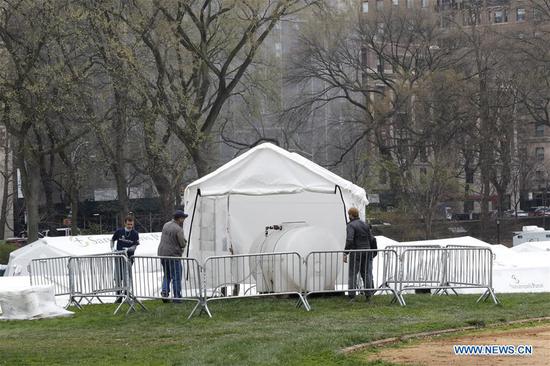 A temporary hospital is under construction in Central Park in New York, the United States, March 30, 2020. (Guang Yu/Handout via Xinhua)

The number of COVID-19 cases in the United States has surged to more than 188,000, according to a new tally from Johns Hopkins University (JHU) on Tuesday.

As of Tuesday night, the United States, which is leading the world in terms of confirmed cases, has reported 188,172 infections, along with 3,873 deaths, showed the tally updated by the university's Center for Systems Science and Engineering.

New York State, the epicenter of the nation's outbreak, has recorded more than 75,833 cases and 1,550 deaths, both the most among U.S. states and territories.

During a press briefing at the White House on Tuesday, U.S. President Donald Trump warned of "very painful two weeks" ahead.

Also speaking at the briefing, Anthony Fauci, director of the National Institute of Allergy and Infectious Diseases, said the United States should prepare for a reality where 100,000 Americans are killed by COVID-19.