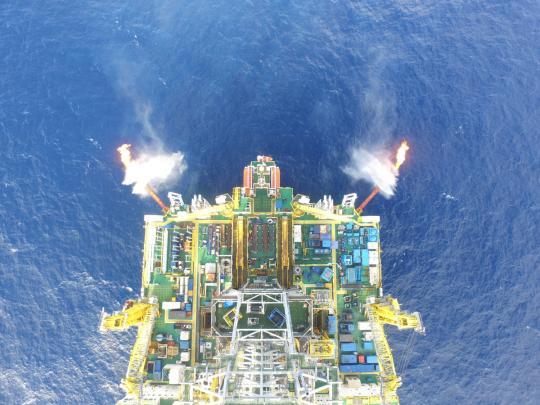 Work is carried out on Wednesday on a South China Sea platform to extract flammable ice in a second trial exploration. A record amount of about 28,700 cubic meters is being collected per day. From Feb 17 to March 18, a total of 861,400 cubic meters was extracted. (Photo/XINHUA)

China said it extracted a record amount of flammable ice during its second trial exploration in the South China Sea, with about 28,700 cubic meters collected per day.

Flammable ice, which is methane hydrate, occurs when methane gas is trapped within ice's molecular structure. Sheets of this frozen gas and ice, seen as a possible source of energy, contain microscopic bubbles of oil and water.

Between Feb 17 and March 18, a total of 861,400 cubic meters of flammable ice was extracted, the Ministry of Natural Resources announced on Thursday.

"We actually set two world records－both the extraction amount in 30 days and the daily production amount," said Ye Jianliang with the Guangzhou Geological Survey Bureau, who leads an engineering group taking part in the trial.

Previous records were also set by China in an initial trial in 2017, the ministry said.

The flammable ice was tapped at 1,225 meters under the sea.

China first found flammable ice in the South China Sea in 2007. It declared its first success in collecting samples of the ice in the area in May 2017.

"The amount we've achieved in the second trial in a month nearly tripled the previous record," said Ye, who explained that the new achievement was realized thanks to improved technology.

In the second trial, Chinese experts developed a drilling technology for horizontal wells, which was adopted for flammable ice exploration for the first time, Ye said.

"The technology significantly improved our ability to explore the deep ocean," he said.

Also, he said Chinese engineers have developed an environmental surveillance system that showed that the inflammable ice collection process led to zero gas leaks and no geological impact.

The stability of gas hydrate can be disrupted if either pressure drops or temperature increases, releasing the trapped methane into the surrounding water. For now, it is still challenging for engineers to efficiently extract gas from natural hydrate.