Italians 'relieved' to get supplies from China 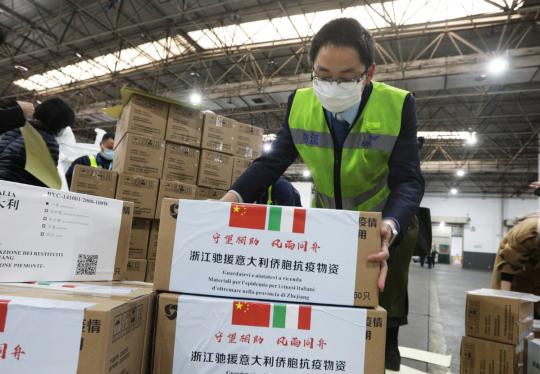 A worker loads disaster-relief materials bound for Italy at Hangzhou Xiaoshan International Airport in Zhejiang province on Wednesday. The materials were donated by people from throughout the province. WANG JIANLONG/FOR CHINA DAILY

People in Italy, where some medical supplies are running low due to the coronavirus outbreak, have expressed their appreciation for China's help after a planeload of needed supplies arrived.

Italy is now the hardest-hit nation after China, with more than 1,400 deaths from COVID-19 and over 21,000 confirmed cases since the outbreak began there on Feb 21, according to the Associated Press.

China delivered the planeload of medical supplies, including masks and respirators, to Italy to help it deal with its growing crisis.

"In this moment of great stress, of great difficulty, we are relieved to have this arrival of supplies. It is true that it will help only temporarily, but it is still important," said the head of the Italian Red Cross, Francesco Rocca.

"We have a desperate need for these masks right now. We need respirators (that will be donated to the government). This is for sure a really important donation for our country," Rocca added.

A team of nine Chinese medical workers arrived in Rome late on Thursday, along with about 30 metric tons of equipment, on a flight organized by the Red Cross Society of China.

Lu Ming, a member of the team who also works with the National Health Commission's international cooperation department, said: "To bring down the mortality rate is a priority in disease control, especially given that we're coping with an emerging virus. So we have dispatched the most competent experts in treating severe and critical cases to Italy.

"We're willing to share hard-won diagnosis and treatment guidelines with Italians, and we also hope that our Italian colleagues will be able to enforce proper quarantine of infected cases and general epidemic control measures," Lu was quoting by China Radio International as saying.

"We have also carried plasma and blood products from recovered Chinese patients," Lu added. Using such infusions of blood plasma in infected patients is believed to be an effective therapeutic approach.

"I appreciate a lot this lovely gesture from China," Eva Dal Pozzo, a senior business consultant in Italy, told Xinhua News Agency. She described the shipment as vital, since the nation's factories do not have sufficient production capacity.

Reuters reported that none of Italy's partners in the European Union responded to Rome's requests for help with medical supplies as they looked to protect their own supplies of masks and other equipment.

The aid from China included nine pallets loaded with tens of thousands of masks, respiratory materials, electrocardiographs and other medical supplies.

Cinzia Pasquale, a senior consultant on European Union affairs living in Lombardy, was quoted by Xinhua as saying, "Seeing how China has managed the outbreak in Wuhan, I am personally very confident of the contribution that the Chinese medical staff will make to the heroic Italian doctors who have been overwhelmed by this health emergency."

Meanwhile, Italy has closed all shops except food stores and pharmacies in Europe's toughest lockdown yet as virus deaths and cases continued to rise.

Italy imposed a nationwide lockdown on March 9, a day after quarantine measures were imposed on a large northern area of the nation.

Prime Minister Giuseppe Conte said the impact of the tightened restrictions would still take another couple of weeks to show.

"We are facing an emergency, a national emergency," he said in a televised address to announce the new restrictions. "We have to limit the spread of the virus and prevent our hospitals from being overwhelmed."

All religious, cultural and sporting events were suspended, and cruise ships are not allowed to dock at Italian ports. The restrictions are expected to remain in place until April 3.

Massimo Bray, a former Italian culture minister, said on social media that China's provision of medical material and expertise was a "great support" at a difficult time.

Italians have also taken to social media to express their gratitude for the arrival of the Chinese medical aid and expertise.

The WHO said in a statement, "Allowing uncontrolled spread should not be a choice of any government, as it will harm not only the citizens of that country but affect other countries as well."