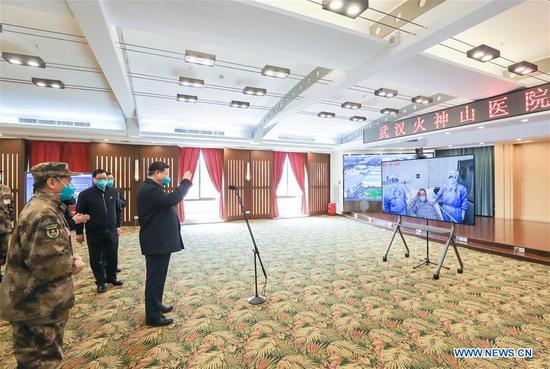 Standing in a hospital hall, a man wearing a medical respirator waved to a big screen. On it, a patient lying in bed flanked by two gowned medical workers waved back.

"What you should do now is stay confident. We all should be confident that we will win this war," the man said through a video link at Huoshenshan Hospital in Wuhan, the epicenter of the COVID-19 outbreak, in central China's Hubei Province.

The man of the hour was President Xi Jinping, commander-in-chief of China's war against COVID-19, who flew into Wuhan Tuesday to inspect the epidemic prevention and control work on the ground.

By this week, the respiratory viral disease has spread to more than 100 countries and regions, infecting over 100,000 people and posing a major public health threat to mankind after SARS, MERS and Ebola.

For Xi, general secretary of the Communist Party of China (CPC) Central Committee and chairman of the Central Military Commission, this represents one of the biggest tests in his eight years of governance, as 80 percent of the infections -- including more than 3,000 deaths -- have been in China.

The COVID-19 outbreak is the hardest major public health emergency to contain since the founding of the People's Republic of China in 1949, he said.

Xi declared a "people's war" to fight this invisible enemy by mobilizing the force of the whole country.

As medics and scientists battled the previously unknown virus head-on, hundreds of millions of people abandoned their holiday plans to stay at home for weeks on end.

Cities were locked down, businesses suspended, public events canceled and even the annual sessions of the national legislative and political advisory bodies postponed for the first time due to a public health emergency.

After an arduous struggle, positive signs have emerged. Daily new cases on the Chinese mainland dropped to 19 on Monday, down from the plateau of thousands a month ago. Most provinces have reported zero increase for days.

Even in Wuhan, the situation has turned the corner with more than 30,000 patients discharged and all the re-purposed makeshift hospitals shut down.

The spread has been basically curbed, Xi said, noting the initial success in stabilizing the situation and turning the tide in Hubei and Wuhan.

LEADERSHIP AT TIME OF CRISIS

Meeting World Health Organization (WHO) Director-General Tedros Adhanom Ghebreyesus in Beijing on Jan. 28, Xi said he has been personally directing the outbreak response and devising prevention and control measures all along.

Epidemic response was on the agenda in a series of Party leadership meetings Xi chaired since early January, including seven meetings of the Standing Committee of the Political Bureau of the CPC Central Committee. Xi also took the lead to make a donation to the cause.

During this period, Xi convened two teleconferences for officials from across the country. The biggest was attended by an unprecedented audience of 170,000.

Before coming to Wuhan, Xi had made two epidemic-related inspections in Beijing, on neighborhood prevention and control measures, patient treatment in designated hospitals, and scientific research.

He also made oral or written instructions every day. On Jan. 22, Hubei Province, of which Wuhan is the capital city, was asked to impose full and strict control over outbound population flows. "Making this decision requires huge political courage. Time calls for resolute action. Otherwise, we would be in trouble," Xi said.

A day later, Wuhan suspended all urban public transportation and cut off outbound flights and trains. Putting a mega-city with over 10 million residents under quarantine was unprecedented but effective.

Tedros said the "serious measures" taken at the epicenter not only protected Chinese people, but also prevented the spread of the virus to other countries.

On Tuesday, Xi again called the people of Wuhan "heroic," saying that today's positive trend in epidemic control would not be possible without their sacrifices and devotion.

"Xi is the backbone of this battle," said Liu Jingbei, a professor at the China Executive Leadership Academy in Pudong, Shanghai. "His leadership is crucial for the country to ultimately beat the epidemic."

Under Xi's command, a central leading group on the epidemic response headed by Premier Li Keqiang was established on Jan. 25. Two days later, Vice Premier Sun Chunlan was sent to oversee the work on the ground in Hubei and has been stationed there ever since. In February, Party chiefs of Hubei and Wuhan were replaced in light of the serious problems exposed in the initial response.

But in essence, what Xi commands is a people's war against the epidemic. By and large, it is a war waged by the people and for the people, reflecting the core value of the 90-million-member CPC.

Xi ordered the use of the entire country's resources to pool strength into tackling the issue, which is an advantage of China's socialist system.

About 42,600 medics were dispatched to Hubei from across the country. Academicians, leading experts on respiratory illnesses and infectious diseases, and one-tenth of the country's intensive care specialists were all called in to the epicenter, according to the National Health Commission.

Outside the hard-hit zone, the manufacturing of medical supplies was cranked up and "green passages" were opened to ensure the goods were delivered on time.

In a short time, everything from surgical masks to advanced life support systems streamed to the front line, including at least 67 sets of extracorporeal membrane oxygenation (ECMO) machines and 17,000 ventilators, according to the Ministry of Industry and Information Technology in early March.

"If I had COVID-19, I'd want to be treated in China," he said. "They know and they care about keeping people alive, and they do it successfully."

According to the China-WHO joint mission, the case fatality rate of COVID-19 patients was estimated between 3 to 4 percent in China and only 0.7 percent in places outside Wuhan.

Universities, research institutes and businesses are working together to improve diagnostics, vaccines and medicines. The latest rapid testing kit can show results in 15 minutes by examining a single drop of blood. And the government made it clear: once confirmed, patients should not be worried about expenses; treatment is free.

Around the country, targeted prevention and control measures were taken to stem the outbreak. In some cities, grid management and neighborhood watches were initiated to detect and isolate suspected cases and their close contacts as soon as possible.

In a huge country with a population of 1.4 billion, people acted orderly; they heeded the government's advice and locked themselves at home for weeks in a row.

The China-WHO join mission said this truly "all-of-government and all-of-society" approach has averted or at least delayed hundreds of thousands of COVID-19 cases in the country.

Under Xi's command, a constant theme of this war has been "people first."

He has stressed putting people's life and health as the top priority and placing the people's interests above everything else.

On Tuesday, Xi said all prevention and control measures have been taken by the CPC Central Committee with the primary focus on preventing more people from being infected and saving more patients' lives.

Viruses respect no borders in the global village. Within weeks, the coronavirus has spread to all continents except Antarctica.

Public health security is a common challenge faced by humanity, and all countries should join hands to cope with it, Xi said.

Since the outbreak, China has actively cooperated and exchanged information with the WHO and other countries, quickly sharing with them the full genome sequences of the new virus after the pathogen was identified on Jan. 7.

Tedros has on many occasions commended China for its serious measures to contain the virus, saying the measures not only protected the Chinese people but also gained time for other countries to gear up their response.

More foreign leaders including Russian President Vladimir Putin sent telegrams or issued statements. According to the Ministry of Foreign Affairs, leaders from more than 170 countries and 40 international or regional organizations voiced support for China.

Xi said China adheres to the concept of building a community with a shared future for humanity as it actively contributes to safeguarding global public health while going all out to protect its people's life and health.

The WHO's Aylward said the tremendous collective will of the Chinese people helped gain a few weeks that were "so important" for the world. United Nations Secretary-General Antonio Guterres expressed gratitude to Chinese who sacrificed many aspects of their normal life to prevent the spread of the virus.

To help the global fight against COVID-19, China made a donation to the WHO, provided masks and protective gowns to the Republic of Korea, sent testing kits to Pakistan, Japan, Iran and the African Union, and dispatched experts to Iran.

Xi said the national rejuvenation, or the Chinese Dream, could not be realized without major struggles.

The epidemic, observers said, serves as a good reminder of that statement. The size of the wild animal consumption business was large. The reserves of essential medical supplies were in serious shortage. There was no bio-security law. Bureaucratism at the grassroots level obstructed the epidemic response.

Xi said the epidemic was a big test for China's system and capacity for governance and called for learning the lessons and targeting the weak links and shortcomings exposed in the epidemic to improve the national emergency management system and the ability to handle urgent and difficult tasks.

Since early February, Xi has begun giving instructions on stabilizing the economy.

The Chinese economy, which grew by 6.1 percent in 2019, is expected to take a hit in the short run. But the impact is manageable. Factories, including suppliers to foreign companies like Apple, Tesla and FAW-Volkswagen Automobile, have resumed operations.

The year is key for China as the country plans to eliminate extreme poverty. Last week, Xi convened a teleconference on poverty relief and ordered cadres to overcome the epidemic impact to clinch a complete victory in the anti-poverty fight.

After achieving a moderately prosperous society in all respects, China will aim for basically realizing socialist modernization by 2035 and becoming a great modern socialist country by the middle of the 21st century.

"Time and history wait for no one," Xi said at a Chinese Lunar New Year reception on Jan. 23, the same day Wuhan was locked down. "We must maintain strategic direction and resolve, stay united, work hard and forge ahead against all odds."