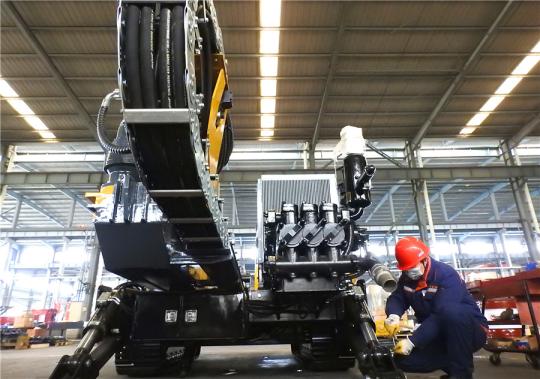 An employee assembles an exploration rig at a factory in Lianyungang, Jiangsu province, over the weekend.(Photo by Geng Yuhe/For China Daily)

Manufacturers in China remain confident about business prospects for the next 12 months, even as the novel coronavirus outbreak weighed heavily on the sector last month, a private survey said on Monday.

"Firms anticipate a recovery in production over the next year due to expectations that production will be ramped up once the coronavirus-related restrictions are lifted," said a report jointly released by media group Caixin and information provider IHS Markit on Monday.

"Notably, the degree of positive sentiment was the strongest seen for five years," the report said, which was based on a survey conducted last month covering around 500 mainland-based private and State-owned manufacturers.

This came in despite the fact that the Caixin China General Manufacturing Purchasing Managers' Index, a headline indicator of the sector's operating condition, plunged from 51.1 in January to 40.3 last month, the lowest reading on record.

A PMI reading above 50 indicates expansion while one below shows contraction.

Subindexes of production, new work and staffing levels all fell at record paces in February, as companies extended Lunar New Year shutdowns, according to Caixin.

The official PMI for February, released on Saturday, portrayed a similar standstill in manufacturing activity and dropped to a record low of 35.7.

In late February, the top leadership set the policy tone of stepping up macroeconomic policy adjustments, following the cut in lending rate and the decision of reducing corporate contributions to social insurance funds. The authorities are also working to formulate more tax and fee cut measures.

"The economy will be able to see a significant rebound when the epidemic is gradually contained and companies accelerate the resumption of business," Zhong said.

Huang Wentao, an analyst with Beijing-based China Securities, said February's abnormally low PMI readings should have reflected the biggest blow dealt by the epidemic to the economy, and economic data should begin recovering from this month.