Tourism sector being battered by outbreak 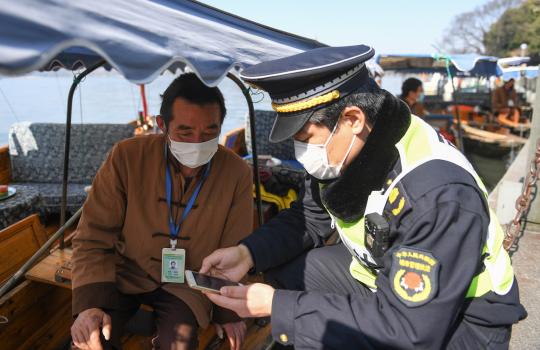 A boatman (left) who works at the West Lake Scenic Area has his health code, which is shown on his smartphone, checked. The attraction in Hangzhou, Zhejiang province, has partially resumed its boat services.[Photo/China News Service]

Travelers expected to return shortly after situation is brought under control

The ongoing novel coronavirus pneumonia has severely hurt the nation's tourism industry, with the China Tourism Academy estimating that the domestic market will plunge in 2020.

According to the academy, domestic visits will fall by 932 million during the year, a decrease of 15.5 percent compared with 2019.

The situation will be worst in the first quarter as domestic visits will drop by 56 percent year-on-year. Revenue in the sector will fall by 1.18 trillion yuan ($168 billion).

Hong Qinghua, founder of Lvmama, an online travel agency headquartered in Shanghai, said that the agency has borne tremendous economic losses as it refunded hundreds of millions of yuan to users who had reserved tour packages and accommodations.

"Some agencies estimate that the industry may face economic losses as high as 3 trillion yuan," he said at a conference in Beijing in early February. "We estimate that the sector's loss will be around 1.8 trillion yuan, which leads to negative growth of 18 percent for the year rather than the 10 percent year-on-year increase expected before the epidemic."

He said that in 2003 when SARS prevailed, the tourism market decreased 13 percent. "Without the ongoing epidemic, the expected revenue of the tourism industry in China in 2020 was about 7.4 trillion yuan.

"The novel coronavirus will be a heavy blow to inbound tourism, which will take a longer period to recover－three or six months longer than the outbound sector," he said. "Of course, outbound tourism is also greatly affected by the epidemic. So far, there are 84 countries activating control measures for Chinese travelers."

He said that the outbreak, however, has united domestic tourism companies, which will benefit travelers. "As long as the epidemic is being controlled, the domestic tourism market will recover quickly."

Thankfully, both the central and local governments are helping travel agencies by launching a series of preferential policies.

The Ministry of Culture and Tourism released a notice on Feb 5, refunding 80 percent of travel agencies' security deposits with the government, which they will be required to pay back within two years.

Also, preferential policies were announced in cities and provinces such as Beijing, Shanghai, Zhejiang and Shandong to help the companies stabilize hiring and reduce taxation pressure with greater financial support.

Song Rui, director of the Tourism Research Center under the Chinese Academy of Social Sciences, told China Tourism News that the government could also set up special foundations for tourism companies to enhance support for the tourism market.

"Domestic tourism, especially destinations outside the center of the epidemic, will resume soon after the epidemic," she said. "The government can give some incentives and also make full preparations to stabilize the market and secure travelers' health." More than 20 famous tourist spots, such as West Lake in Hangzhou, Zhejiang province, and Xuanwu Lake in Nanjing, Jiangsu province, resumed operations by Thursday.

Hong Qinghua, Lvmama's founder, said that though the tourism market is highly sensitive and easily affected by emergency events, it's also tenacious and can recover rather quickly.

Dai Bin, president of the tourism academy, said that tourism is easily affected because it's market oriented, but he remains optimistic about the future development of tourism after the novel coronavirus is controlled.

"The landscape of tourism has not been changed, which means that domestic tourism will rebound," he said at a conference in Beijing on Thursday.

"According to a recent survey by the academy, about 71.5 percent of the people surveyed said that they will go for a trip after the coronavirus is controlled and 20.7 percent said they will travel as soon as possible when the situation gets better," he said.