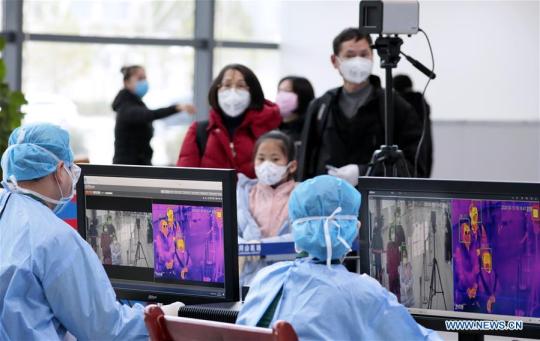 The central work group that guides novel coronavirus epidemic control in Hubei province is committed to severing sources of infection, securing medical supplies and ensuring the provision of medical care, a key member of the group said on Thursday, while announcing it would "wage an all-out battle" against the disease.

While striving to achieve these goals, the group, headed by Vice-Premier Sun Chunlan, has been focusing on containing the spread of the virus in Wuhan, the epicenter of the outbreak, and preventing the epidemic situation in the rest of Hubei from reaching the same level of severity, said Ding Xiangyang, deputy secretary-general of the State Council, China's Cabinet.

"The ferocity of the virus, the scale and magnitude of its spread, and the resulting pressure faced by the whole of society, are unprecedented," he said at a news conference held by the State Council Information Office in Wuhan.

"By sending the work group to Wuhan, the central leadership has sent a message that the city is not an isolated island and is not fighting alone," he said.

In order to effectively cut the infection sources, the group was directly involved in devising the landmark decisions to put Wuhan under lockdown — suspending transportation and restricting the movement of residents — and extending the Spring Festival holiday by 10 days.

"Enforcing quarantine measures is the most cost-effective and efficient way to reduce infection," he said, adding that despite some misunderstanding and controversies during the initial rollout of these policies, the authorities had resolutely implemented these measures, which have proved effective in stamping out the virus's spread at its root.

Lian Weiliang, deputy head of the National Development and Reform Commission and another member of the central work group, said on Thursday that medical supplies have now been secured overall and supplies of daily necessities are sufficient.

He said the authorities in Wuhan are aiming to provide a total of over 70,000 beds to accommodate patients and those under quarantine, including over 30,000 at designated hospitals.

The group has also attached great importance to medical treatment, sending a total of 278 national-level medical assistance teams to Hubei province comprising 32,395 health workers, Yu Yanhong, a member of the group and a senior official with the National Health Commission, said on Thursday.

In addition, the group is tasked with enhancing oversight over poor implementation of containment measures, launching investigations and urging rectification, added Ding from the State Council.

"We have held talks with local government and health authorities in Wuhan to resolve issues such as delays in treatment and unclear statistics," said Ding, adding that the group has warned officials that they will be held accountable for failures.

"However, the situation remains grim and is subject to change. As we wage an all-out fight against the disease, we must be more determined, steadfast and resolute and fight until the final victory," he said.

The National Health Commission reported 394 new confirmed cases on the Chinese mainland on Wednesday, sharply down from 1,749 cases the previous day.

Another 1,779 infected patients were discharged from hospitals on Wednesday. "For the second day in a row, the number of discharged patients has exceeded new infections, with the gap widening. This demonstrates the outcome of the country's rescue efforts and the downward pressure on medical care," commission spokesman Mi Feng said on Thursday.

The death toll rose by 114 on Thursday to 2,118 and the cumulative number of confirmed infections stood at 74,576.

That includes 29 foreign citizens who contracted the virus in China, and 18 of whom have recovered and were discharged from hospitals, and two died, according to the central work group.

In Hubei, the center of the outbreak, there were 349 new infections on Wednesday, the first time that daily new infections had fallen below 1,000 since late January.

The latest diagnostic guideline for novel coronavirus pneumonia removed the category of clinical determination of cases, referring to infections confirmed through symptoms and CT scans rather than nucleic acid testing, according to the commission.

"Counting clinically diagnosed cases was implemented as an interim policy aimed at facilitating timely treatment of suspected cases and reducing the mortality rate when the surge in infections in Hubei far outpaced its testing capability," said Wang Guiqiang, head of the infectious disease department at Peking University First Hospital.

Health experts have decided to remove the category and align the counting methods in Hubei with the rest of the country since the region's testing capability has caught up and the backlog of patients awaiting diagnosis has been cleared.

The number of provincial-level regions that reported zero confirmed cases on Wednesday rose to 13 on Wednesday from eight a day earlier. The remaining regions have each added less than 10 cases in one day, according to the National Health Commission.

However, Wang Chen, president of the Chinese Academy of Medical Sciences, said that novel coronavirus is likely to turn into a chronic disease and coexist with human beings like flu.

"This is entirely possible and we need to be prepared for it by understanding its transmission modes, virology information, and improving therapies and prevention measures," he said.

Comparisons have often been drawn between the novel coronavirus and a closely related pathogen that causes severe acute respiratory syndrome, which claimed over 700 lives worldwide in 2002-03 and was thought to have disappeared, but Wang said SARS transmits fast and kills its human hosts rapidly, thus hindering its ability to reside in people for extended periods.