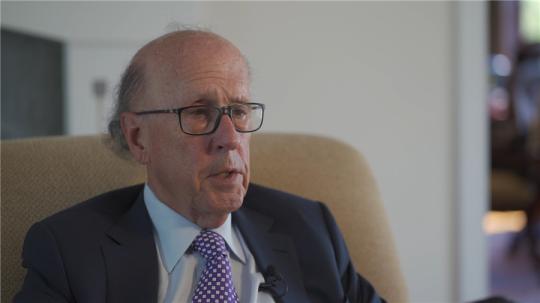 Stephen Roach, a senior fellow at the Jackson Institute of Global Affairs and a senior lecturer at Yale's School of Management. （Photo provided to chinadaily.com.cn）

The new coronavirus will deliver a sharp punch to China's economy, but it's not "a devastating blow", and recovery will be rapid without long-term damage, said economist Stephen Roach.

"I think the shock will last a little longer than the one-quarter hit of SARS in 2003, and the coronavirus comes at a time when China's economy has softened. It's serious, but it will be short-lived," Roach, a senior fellow at the Jackson Institute of Global Affairs and a senior lecturer at Yale's School of Management, told China Daily.

"In the third quarter, I think you'll see a meaningful rebound aided by measures taken by the central bank," he said.

Official Chinese manufacturing data are scheduled to be published Feb 29.

The measures crimped production. Workers couldn't travel and many supplies could not be shipped to factories.

But there are early indications that manufacturing centers along the coast are resuming production as some travel restrictions are eased, Reuters reported.

Limiting travel and instituting quarantines appear to have slowed the spread of the new strain of the coronavirus. Figures as of Thursday morning showed the virus infecting 74,292 people and killing 2,009, or about 2.7 percent of those infected.

Roach, stressing that he's an economist and not an epidemiologist, said the coronavirus appears to be more contagious but less deadly than SARS. The government's response is the key difference between the two outbreaks.

Compared with SARS 17 years ago, he said, the government this time has been transparent and was quick to report the genome of the virus to international researchers.

"China has also been transparent in admitting the initial inadequacies of the reporting system. Compared with SARS, there has been a far more open discussion of the ramifications of this terrible outbreak," said Roach.

The coronavirus outbreak won't prompt international companies to transfer production to other nations because an efficient supply chain takes years to develop, and it's impossible to move and replicate it on short notice, he said.

"Unless this turns out to be a pandemic, I think foreign direct investment will be largely unaffected," Roach said.

Nevertheless, there will be dislocations as production cranks up, and some disruptions will be major, he said.

Apple said production of the iPhone is resuming, but return to pre-outbreak levels will be slower than anticipated. Apple and the US stock market took a hit Tuesday, but rebounded Wednesday.

The market rebound came after China's Ministry of Industry and Information Technology said it would connect factories and technology companies to spot weak links in supply chains.

Roach said he looked at the consumption of coal used to generate electricity as a rough measure of the impact of the coronavirus on China's economy.

On Tuesday, Goldman Sachs said the average coal consumption at major power companies was less than 400,000 tons, down about 40 percent from the post-Lunar New Year period in 2019.

But three sectors — smelting, chemicals and building materials — account for about 54 percent of China's total industrial demand for electricity. The reduction in coal consumption may underscore the current state of these sectors, but may not be a good indication of the present situation of light manufacturing, including the export-heavy consumer electronics sector, analysts said.

The coronavirus outbreak plays out against a sluggish worldwide economy, but so far the US economy, now in its 11th year of expansion, hasn't been hit hard.

But there are no guarantees.

"(Former Fed chairman Alan) Greenspan said it best: 'The US is not an oasis in the global environment,'" Roach said.