South may be invaded by locusts 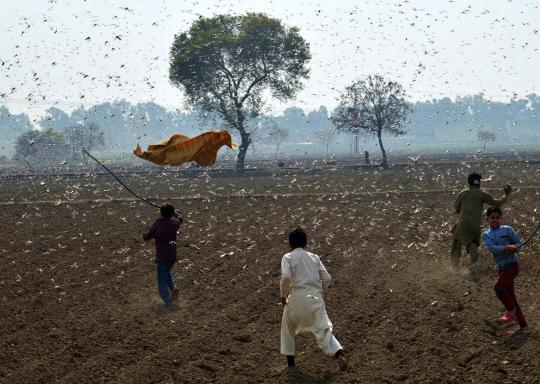 Children try to drive away desert locusts swarming in the Okara district of eastern Pakistan's Punjab Province on Saturday. Some countries in East Africa, West Asia and South Asia are experiencing seldom-seen plagues of the insects. (XINHUA)

The invasion of desert locusts that has already thrust millions of Africans into a food security crisis may pose threats to China's southern regions this summer.

Yunnan and Sichuan provinces, as well as the Guangxi Zhuang autonomous region, are most likely to be affected, according to Zhang Zehua, a researcher at the Institute of Plant Protection of the Chinese Academy of Agricultural Sciences.

"It is extremely unlikely that desert locusts will directly migrate into China's inland areas, but if the overseas desert locust plague persists, the probability of locusts entering China in June or July will sharply increase," Zhang said.

He said the border area between the Tibet autonomous region and the countries of Pakistan, India and Nepal is a desert locust spreading area.

However, the Qinghai-Tibet Plateau can function as a shield against the swarms, so there is a slight chance that the locusts could flock into inland areas of China, Zhang said.

He also said he believes that desert locusts won't immediately pose a threat to agricultural production in China due to the nation's prevention system.

In January, the locusts arrived in Djibouti and Eritrea and are now spreading to Tanzania and Uganda, threatening the food security and livelihoods of millions of people.

The infestation has been called the worst in decades, with the pests devouring pastures and crops just hours after their arrival at a location, according to the United Nations World Food Programme.

According to the UN, the desert locust is among "the most dangerous migratory pests in the world". A single locust can travel 150 kilometers, and a small swarm can consume enough food to feed 35,000 people in one day.

The UN has also warned that as desert locust swarms currently reproduce rapidly across the region, they could grow to 500 times their current number by June if left unchecked.

Zhang warned that the desert locust may pose threats to China's food security if the species is not well controlled and settles down in inland China for breeding.

"Our current locust prevention and treatment system is capable of controlling the possible invasion to China. But real-time monitoring, sufficient pharmaceuticals and pesticide application equipment as well as trained staff and cross-region coordination by the central government should be placed in advance," he said.

He also called for cooperation between China and other countries－especially Pakistan, India and Nepal－to help prevent the desert locust catastrophe and share the latest information on the swarms' migration.

China has formed a mature locust prevention and control response mechanism and has established a national four-tier locust monitoring and early warning system.

Based on China's experience, Zhang suggested that locust control in African countries should be carefully designed and adopt more green technologies with a sustainable development goal.

He suggested that locust-hit regions be scientifically treated with different methods based on their conditions.

Bio-methods, such as induced infertility and improvements on local ecological systems meant to protect the locust's natural enemies, should be given priority, he said.

"Desert locusts usually damage the grassland－a more fragile ecosystem than any other, such as forests or mountains. Each member in the eco-chain of the grassland is crucial," Zhang said.

He said chemical pesticides should be the last resort as they will cause some irreversible damage to the grassland ecosystem as a whole.