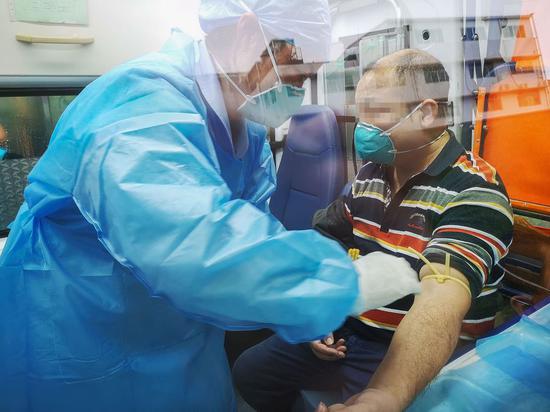 Among the COVID-19 patients currently receiving convalescent plasma therapy in the virus-hit Wuhan, one has been discharged from hospital, Chinese science authorities said Monday.

Another patient has been able to walk and the rest are still recovering, Sun Yanrong, an official with the Ministry of Science and Technology, said at a press conference in Beijing.

The first dose of convalescent plasma from a COVID-19 patient was collected on Feb. 1 and the first severely ill patient received the treatment at a hospital in Jiangxia District in Wuhan on Feb. 9, said Sun.

Another 10 patients will receive the convalescent plasma therapy this week, Sun added, while calling on more cured patients to donate their plasma.

Convalescent plasma therapy is an important method for effectively treating patients with severe and critical symptoms, Guo Yanhong, an official with the National Health Commission (NHC), told reporters at the same press conference.

The therapy aims to use the antibodies in the convalescent plasma to minimize the presence of the virus in patients, she said.

Donating plasma causes little harm to the donor, and there is no need to worry, said Wang Guiqiang, director of the infectious disease department of the Peking University First Hospital.

Donors must be recovered patients who are up to the standard for being discharged from hospital. Only plasma will be collected while red blood cells, white blood cells and blood platelets will be transfused back into the donor's body, Wang noted.

One or two weeks after drawing 200 to 300 milliliters of plasma from a donor, the plasma in the donor will completely recover to its original state, Wang added.

A total of 10,844 people had been discharged from hospital after recovery by the end of Sunday. Currently there are 57,934 confirmed cases on the Chinese mainland, among them 10,644 are severe cases, according to the NHC.