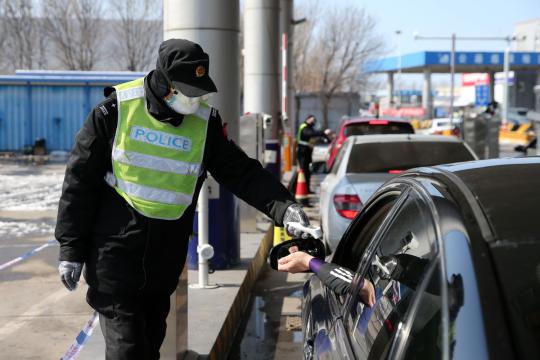 A traffic police officer checks body temperatures of passengers in a car entering Beijing on an expressway on Saturday. (WANG ZHUANGFEI/CHINA DAILY)

There will be no peak period during this year's 40-day Spring Festival travel rush, which will end on Tuesday, due to the ongoing novel coronavirus, the Ministry of Transport said over the weekend.

Because of measures taken to curb the epidemic, passenger trips in the 40 days from Jan 10 to Tuesday are expected to be less than half the number in the 40-day travel rush last year, with the decrease especially sharp during the return leg that started on Jan 25, Vice-Minister of Transport Liu Xiaoming told a news conference held by the State Council Information Office on Saturday.

As a growing number of people take various modes of transport to return to work after the Lunar New Year holiday, many overseas observers have expressed concern about the pressure the mass migration will place on the country's epidemic prevention and control efforts.

However, ministry statistics show that only 283 million trips had been made between Jan 25 and Friday, down 82.3 percent year-on-year, as a result of travel restrictions and quarantine aimed at containing the spread of the virus.

The period for return trips will be longer this year, with much lower peak passenger flows than in previous years, Liu said, adding that the daily number of return trips is expected to be maintained at 15 million－only 20 percent of passenger volumes during last year's travel rush.

"Considering that the 40-day Spring Festival travel rush is going to be completed on Feb 18, there won't be significant changes in the volume of passenger trips," he said. "It means the travel peak that appeared in previous years won't be seen this time."

The country's daily new confirmed cases of novel coronavirus pneumonia outside Hubei province, the epicenter of the outbreak, have been dropping for 12 days, the National Health Commission said on Sunday.

Citing ministry analysis, Liu said the country would gradually see migrant workers return to work and students go back to schools in the coming days.

An estimated 300 million migrant workers will travel back to their workplaces, 80 million of whom have already returned. Some 120 million workers are expected to make the trip from now until the end of February, with another 100 million expected to return next month.

In addition, an estimated 100 million students will be making return trips, depending on when schools start the new semester.

To ensure safe and smooth transportation, transport departments at all levels have been stepping up disinfection efforts and the collection of passenger information, as well as enhancing emergency management capabilities to cope with rainy or snowy weather.

The ministry has said the number of passengers on buses, trains, airplanes and ferries should be less than half their approved passenger capacity to reduce cross-infection risks.

"With travel demand around just 1 million on a daily basis, the company can provide chartered train services to pick up migrant workers from sources of labor to ensure orderly return trips during the non-rush period," he said.