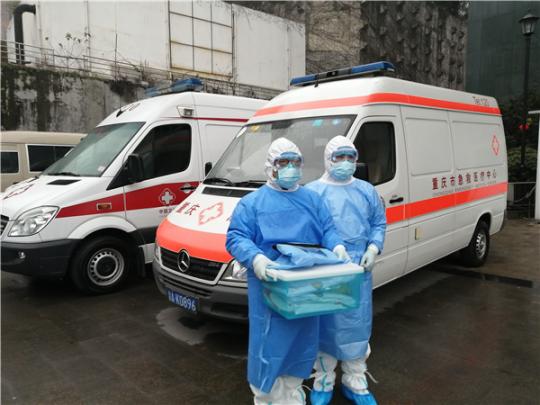 The sudden spike in newly confirmed cases of novel coronavirus pneumonia in Hubei province on Wednesday is due to a revised diagnosis criterion, and experts said the change, which is within expectations, can enable more people to obtain appropriate medical treatment.

Of these newly confirmed cases, 13,332 were clinically diagnosed, meaning suspected patients were identified as having the disease based on symptoms, medical history, and computerized tomography, or CT scans, rather than testing positive for the virus using lab kits, which accounted for 1,508 of the new cases.

The surge in Hubei pushed the new infections nationwide on Thursday morning to 15,152. Among the newly added 254 deaths, 242 were in Hubei, said Mi Feng, a spokesman for the National Health Commission, on Thursday.

On Thursday morning, there were 52,526 confirmed cases on the Chinese mainland, he said.

The sudden increase is due to a revised diagnostic criterion, according to the Hubei health authorities.

On Feb 3, the National Health Commission released the fifth edition of the diagnosis and treatment plan. It required Hubei to count clinically diagnosed patients as newly confirmed cases so that more suspected patients can receive the same standard of treatment as confirmed ones, thus reducing the possible spread of the virus and improving the treatment success rate.

On Tuesday, the provincial health commission released the first figure for clinically diagnosed cases, which was 10,567 as of late Monday night, but it wasn't added to the newly confirmed cases that day.

The commission said the two numbers were combined as required by the prevention plan starting on Thursday, yielding the sudden jump in number of new confirmed cases.

World Health Organization officials also said on Thursday that a jump in the number of new cases of coronavirus in China reflects a "broader definition" of infection.

"It is our current understanding that the new case definition widens the net, and includes not only lab-confirmed cases but also clinically diagnosed cases based on symptoms and exposure," WHO spokesman Tarik Jasarevic told Reuters.

Zeng Guang, chief epidemiologist at the Chinese Center for Disease Control and Prevention, told Global Times that the increase is within expectation and the change in diagnosis standards tightens a loophole in the spread of the virus.

He said there are instances where suspected patients have shown typical symptoms of the disease, but they couldn't be listed and treated like confirmed patients because their test results for the virus were not conclusive.

The commonly used diagnostic method requires doctors to take viral samples from the patient's throat or nostrils. This approach is convenient but produces less accurate results than the more time-consuming method of sampling from the lung, where there is a higher density of coronavirus.

Coupled with a limited supply of test kits and manpower for the tests, some doctors have relied on clinical observations to increase diagnostic efficiency, Feng Zhanchun, a professor at Tongji Medical College of Huazhong University of Science and Technology in Wuhan, Hubei province, told local media on Thursday.

One of the key criteria is to search for signs of pneumonia with CT scans, he said. The combined diagnostic methods will reduce the waiting time for patients to be confirmed and treated, which is instrumental in containing the outbreak.

However, some epidemiologists have pointed out that changing statistical methodology and diagnosis standards may interfere with previous predictions and analytical models. Medical staff and resources may also be stretched thin due to a huge influx of new patients, they added.

Compared with the rest of the nation, the epidemic in Wuhan has not yet been controlled, and many challenges and unanswered questions remain, said Chen Yi-xin, the deputy head of a central government group to guide epidemic control work in Hubei.

These challenges include lackluster response, combating misinformation, as well as evaluating the total number of infected patients and tracking the spread of the infection, he said at a meeting on Wednesday.

The three priorities at the moment should be arresting the growth of new cases, reducing the total number of patients, and controlling unexpected variables, he said.

Patients shouldn't have to wait for beds, and all suspected and confirmed cases should be quarantined, diagnosed and treated in due time, he stressed.

On Thursday, Hubei also announced that factories in the province will not resume production until Feb 23, and new semesters have been postponed indefinitely through the entire education system.