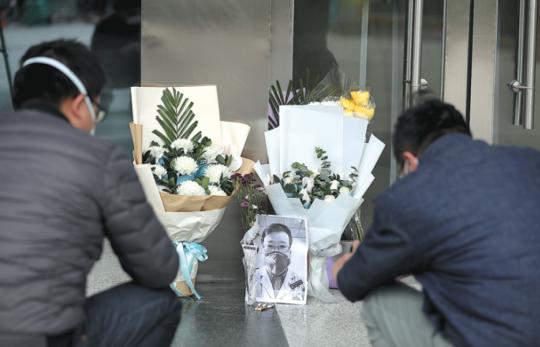 Condolences and sadness filled the hearts of people across the country on Friday after a doctor in Wuhan — who had originally been reprimanded for sounding an early alarm on the novel coronavirus — died of the very same pathogen early in the morning.

The National Supervisory Commission on Friday said it would dispatch a team to Wuhan to investigate issues regarding the death of Li Wenliang amid a public outcry.

Li, a 34-year-old ophthalmologist at Wuhan Central Hospital in Hubei province, died after being infected with the virus. Attempts to resuscitate him were unsuccessful, the hospital said.

Li was among a group of people who tried to warn about the novel coronavirus when it first emerged in Wuhan, the epidemic center of the disease, but was reprimanded by local police for "spreading rumors online".

On Dec 30, Li said in an online WeChat group that he had seen a report that showed positive test results of severe acute respiratory syndrome for seven patients, and told colleagues and friends to be careful.

On Jan 3, Li was summoned by Wuhan police for "spreading fake information on the internet". He was reprimanded but not fined or detained, according to the police.

Li carried on his normal work in the hospital until Jan 10 when he came down with a cough and fever, symptoms of the novel coronavirus. On Feb 1, he posted on his Weibo account, the Chinese equivalent of Twitter, that he was confirmed as having the infection.

Li's death led to a massive outpouring of grief all across society.

The NHC, the Hubei health commission, the Chinese Medical Doctor Association and the Wuhan government all expressed condolences over Li's death and extended sympathy to his family.

On China's social media platforms, condolences poured in with hundreds of millions of views.

A large number of netizens began to pray for Li since Thursday night after hearing he was sick. "I won't sleep tonight!" said one comment that received 350,000 thumbs-up emojis by Friday morning.

Many were also questioning the possibility of a dereliction of duty by Hubei officials for ignoring Li's early warning and questioning him for so-called rumors, which later turned out to be true.

After being approved by the Communist Party of China Central Committee, the National Supervisory Commission made a quick response on Friday by deciding to send a special group to Wuhan to conduct a comprehensive probe over issues regarding Li, according to a brief release on the joint website of the CPC Central Commission for Discipline Inspection and the NSC.

As epidemic control work is still at a critical phase, the National Health Commission on Friday emphasized the need for society to unite while facing the contagion.

"At this critical moment for epidemic control, all of society should better appreciate medical personnel as well as rally to overcome difficulties and win the battle against the virus outbreak," the commission said in a statement.

It said medical workers, regardless of personal safety, have been bravely fighting the virus on the front line since the outbreak of the epidemic, and they have made great contributions to protecting public safety.

The Chinese Medical Doctor Association on Friday also called for medical workers to better protect themselves while working on the front line to combat the virus.

"We admire Li's scientific spirit of seeking truth from facts," the association said in a statement. "His spirit of bravery, not fearing difficulties, fulfilling duties, healing the wounded and rescuing the dying is something all medical workers should learn from."

The commission said the task of epidemic prevention and control is still arduous and the working environment of medical staff is very dangerous, and it called on all medical workers on the front line to better protect themselves and avoid being infected.

"Only if you're healthy will you have the power to combat the disease. Your health is the guarantee for the recovery of all patients," the association told all medical staff in the statement.

It also called for governments at all levels and medical institutes to care more about medical workers' physical and mental health.