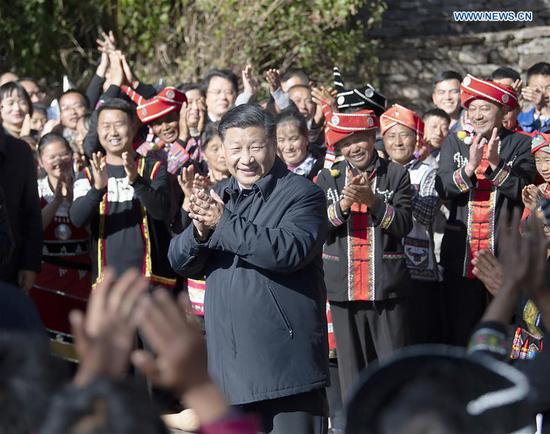 Xi Jinping, general secretary of the Communist Party of China Central Committee, has congratulated villagers of a village of the Wa ethnic group in southwest China's Yunnan Province for shaking off poverty.

Xi made the remarks on Sunday during a visit to Simola Wa Village, Tengchong City, during an inspection tour to the province ahead of the Chinese New Year.

After China completes the building of a moderately prosperous society in all respects, it is necessary to comprehensively promote rural vitalization and further address problems including the imbalance between urban and rural development, Xi said.

Efforts should be made to develop rural industries, improve rural economy, increase income and improve people's wellbeing, he noted.

During his visit to the Wa village, Xi beat a wooden drum three times according to local customs to wish favorable weather for bumper harvests, peace for the country and the people, and peace for the whole world. He also extended Chinese New Year greetings to the villagers.