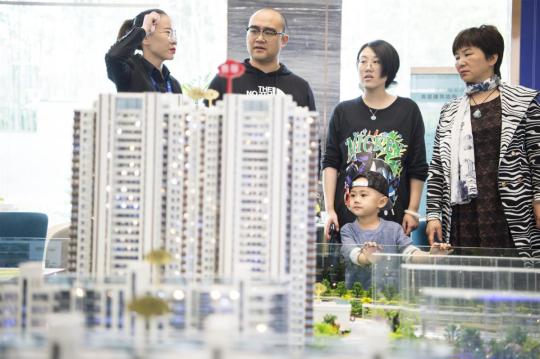 Out of the 70 major cities tracked by the National Bureau of Statistics (NBS), 44 cities reported higher prices for new homes, compared with 50 in October. It was also the lowest recorded figure in the last two years, according to the NBS.

Local governments continued to implement tightening measures in accordance with their requirements in November, while the long term mechanisms have helped ensure stability in the real estate market, said Kong Peng, chief statistician of the NBS.

In November, new home prices in the four first-tier cities rose by 0.6 percent on a monthly basis, with Beijing seeing an increase of 1.7 percent, followed by Shanghai (0.3 percent) and Shenzhen (0.2 percent). Guangzhou, however, saw prices drop by 0.5 percent from October, according to the NBS data. Compared to last year, the four top tier cities saw a 4.9 percent growth in their new home prices in November on a yearly basis.

"Beijing's growth in new home prices may be due to the newly completed Beijing Daxing International Airport and the ongoing development work in Tongzhou. The promising development outlook has supported price hikes in the two regions," said Yan Yuejin, research director at the E-House China R&D Institute.

On an annualized basis, home prices in second-tier cities grew by 7.9 percent, down 0.8 percentage point from October, marking the seventh month that the growth rate has fallen. In third-tier cities it was the eight consecutive month of flat or slower growth rates.

"No matter whether it is on a monthly or an annual basis, the 70 cities' growth ranges have narrowed in comparison with the October data, which indicates that home prices are seeing slower growth rates, and in some cases even a downward trend due to the tightening measures," said Yan.

The secondary market is usually seen as a better reflection of the property market in China. In November, it hit a four-year low as just 32 cities reported monthly price hikes, while 33 cities reported price declines.

The growth rate of used home prices in second-tier cities has declined for seven months in a row, and that of third-tier cities for eight consecutive months.

"Prices of pre-owned homes fell in more than 30 cities during October and November, indicating a turning point for the property market," said Zhang Dawei, chief analyst at Centaline Property Agency Ltd. The tendency will continue into December if the existing tightening policies continue, Zhang said.

According to Centaline data, as many as 160 tightening measures targeted at the property market were announced in the fourth quarter to date, and in the first 11 months there were some 554 real estate restriction policies, 30 percent more than the same period of 2018.