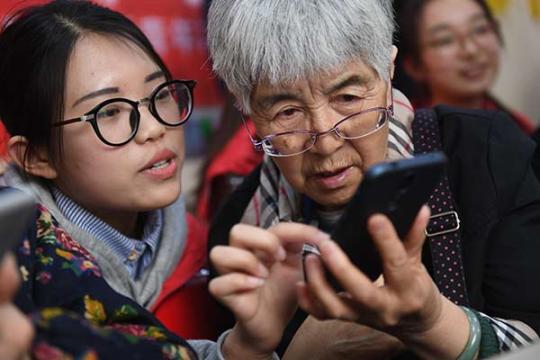 A volunteer teaches an elderly woman how to use a smartphone in Taiyuan, Shanxi province, on Tuesday. (Photo by Wu Junjie/China News Service)

Seniors in China are still highly likely to believe rumors and pseudoscience, according to reports. That's despite improved scientific literacy among the general population as a result of rapid growth of the awareness of popular science, the companies that promote it and increased investment in the field.

From 2006 to 2017, China's science popularization capacity development index registered average annual growth rate of 8.08 percent, while the level of scientific literacy rose from 0.2 percent in 1992 to 8.47 percent last year, according to the China Research Institute for Science Popularization and the China Association of Science and Technology.

"It shows that with the advent of an aging society, the job of improving seniors' scientific literacy will become more arduous," said the Survey on Chinese Citizens' Scientific Literacy in 2018 by the China Research Institute for Science Popularization.

In recent years, China has seen more scientists and science communicators using digital platforms to combat pseudoscience, which is classified as rumors, statements, beliefs, ideas or practices that are stated as fact, but are often fabricated and scientifically untested. Despite that, many young Chinese have experienced difficulties when trying to pass on that message to older people.

"I dare not repost that sort of content in family chat groups on social media," said 25-year-old Kong Yalun, from Xi'an, Shaanxi province. "I've posted them before, but no one believed a word; instead, they tried to 'educate' me with rumors in return."

For example, last year, Dingxiang Doctor, a digital platform that debunks medical rumors online, released 101 articles that disproved common, inaccurate claims. However, many netizens said that when they forwarded the articles to family chat groups, they were questioned, scolded and even removed from the group by older family members.

"It reflects the educational difference between generations," said Yun Wuxin, a food engineering expert who has popularized food science for more than 10 years. He believes that, in general, members of the older generation lacked training in logical or critical thinking when they were young, so they have an exaggerated belief in personal experience, tradition or superstition.

"This creates the conflict. In Chinese tradition, few seniors will believe that their children or grandchildren are more knowledgeable than they are," he said.

"Sometimes, when you try to communicate science to them, it doesn't matter whether what you say is right or wrong, or how logical or scientific it is; rather, it depends on how much authority and credibility you have in your family."

He added that to better educate seniors, young people should avoid a condescending attitude that implies "your thoughts are outdated and foolish"－instead, they should build mutual trust and let them feel "It's okay to fall victim to rumors" and "I'm standing by your side".

He added that new media that popularize science in fresh, innovative ways－such as short videos, video blogs and animations－are very effective with young people. However, traditional methods, including television, community visits by scientists, neighborhood exhibitions and science columns in newspapers, are very important for middle-aged and elderly people who really need to understand science.